It's time we secure a future without coal in New Mexico, across America, and around the world. It won't be easy. Along the way, we will need a lot of help, creativity and inspiration.

While we draw strength from each other, our movement to end coal and save our planet from climate change also honors the millions of people viciously poisoned and ruthlessly exploited by the relentless, destructive impact of coal. From infants and children to adults and our beloved elders, the litany of coal's negative effects is brutal and it's growing.

Of course, these terrible health threats from toxic pollution are not the whole sad story. Coal is also a primary driver of human–made climate change—the defining global environmental challenge of our age. The production cycle of coal is a cycle of death. Coal threatens our loved ones, our friends and our planet—all of us.

Despite the grave threat climate change poses to the planet and the future of human civilization, 2010 saw the highest recorded emissions of greenhouse gases in history—thirty billion tons of energy–related carbon pollution. By the way, thirty billion tons equals sixty trillion pounds. Half of this pollution came from coal.

Obviously, global climate change is an enormous and complex problem. Scientists are still just beginning to understand the impacts on health, biodiversity, economies and food supply. We"ve been trying to address climate change for at least thirty years, yet carbon pollution continues to increase. No doubt, it's easy to get discouraged and be confused about what to do.

Remember, change starts with one person, one act. Our struggle to end coal is built one person at a time, but the power of one becomes the power of many. Creating a future based on democratic and equitable principles is within our reach.

While we have to keep our eyes on global solutions to this planetary challenge, we also have to find ways to take action locally and find solutions everyday, right here and right now.

PNM's pollution habit is having a dreadful impact on our air, land and water; our economies; and our survival. PNM has racked up more than sixty thousand air quality violations—sixty thousand pollution violations at our expense! 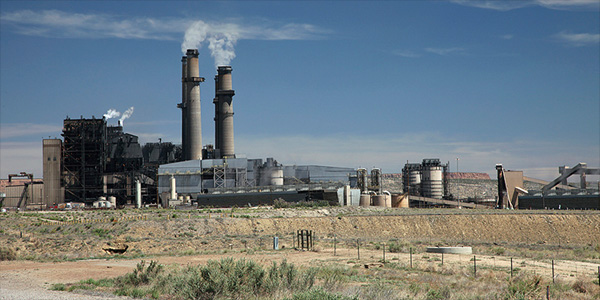 The pollution levels coming from PNM's coal plants are among the highest in America. Just one of these plants, the San Juan Generating Station produced more than 8.5 million tons of carbon air pollution and consumed more than 9.3 billion gallons of clean water in 2010. PNM must be held accountable for causing more than half of all of New Mexico's carbon pollution and devastating toxic emission for local communities. According to the Environmental Protection Agency the San Juan Generating Station is the 18th highest NOx emitter (nitric oxide and nitrogen dioxide) out of the 496 US coal plants.

The nexus of coal, water management, climate change and drought is especially important in America's southwest. New Mexico, as well as parts of Arizona and Texas, is currently in the midst of a catastrophic drought. In recent weeks, the skies outside my home have been thick with smoke from wildfires raging out of control in all directions: from fifteen miles away near the Santa Fe Ski Basin—the Pacheco Fire; to thirty five miles away just outside Los Alamos National Laboratory—the devastating Las Conchas Fire, the largest fire in New Mexico history; to two hundred miles away, the largest wildfire in Arizona state history—the Wallow Fire.

New Mexico is seeing the disastrous consequences of climate change sooner and more clearly than many other US states. PNM is sacrificing the health and livelihood of New Mexicans, right now and far into the future, at the throne of coal.

PNM tells us that we must have coal to have electricity in New Mexico. That is a lie. PNM is addicted to coal because they think it makes them more money today, and they don't need to care about tomorrow. Money means more to PNM than a child with asthma, a sky full of smog, or a legacy of drought, wildfires and economic failure.

Here are some questions that all have the same answer:

The answer to all these questions is PNM. Despite all the scientific and economic facts, coal is a habit that PNM simply cannot break on its own.

Of course, the pain and destruction coal brings to people and the planet is not a natural disaster. There are men and women who are doing this to us and they have to be held accountable. The leaders of PNM have earned our scorn for years of reckless business practices that prey on public health, destroy the environment and stifle innovation.

PNM could not maintain its course of malfeasance and greed without the enthusiastic help of so–called public officials who sell the public trust for campaign contributions—officials like New Mexico Governor Susana Martinez. The Martinez administration has become the mouthpiece for PNM in their shared drive to overturn and undermine every environmental safeguard they can get their pollution–stained hands on.

Here's the deal. PNM took thousands of dollars of the money it gets from ratepayers—families and businesses in New Mexico. They took this money from us and they gave it to Susana Martinez as a campaign contribution to help her become the governor of New Mexico. Now, Governor Martinez is doing whatever PNM asks her to do, so they can make even more money from New Mexico ratepayers. The Governor's newly appointed Environmental Improvement Board has just rubber stamped PNM's plan to keep polluting.

This is payback for political contributions masquerading as public service and it is an outrage! 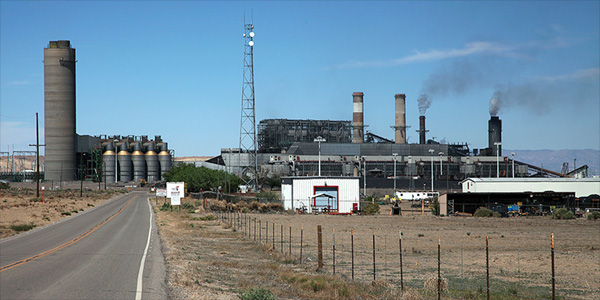 There is a wave of coal plant closings in the US and tragically PNM is moving in the opposite direction: In its current rate case before the Public Regulation Commission (PRC), PNM is raising rates by 18% and extending the life of its coal plants, despite public opposition. This means that while other utilities are retiring their coal plants and investing in renewable energy resources, PNM is reinvesting in dirty coal, with our money. The company presents its supply of coal–fired energy as "low–cost" to the PRC and that is the end of its shortsighted analysis.

Together we can end coal in New Mexico. Together we can create a just and equitable energy system, stop the poisoning of our environment, and do our part to save our planet from disastrous climate change. That is our mission at New Energy Economy (NEE). We take a more holistic long–term view—we want to have competitively priced energy that is also safe, reliable, and responsive to public concern. That means instituting aggressive energy efficiency and installing renewable power systems. This will create jobs and reduce pollution.

New Energy Economy led a two–year effort to create New Mexico's landmark carbon pollution reduction law. This law, adopted in 2010 requires facilities discharging more than 25,000 tons of greenhouse gas pollution to reduce emissions by 3% per year with a goal to reduce this pollution 25% below 1990 levels by 2020. The Petition before the Environmental Improvement Board went in strong with stellar expert testimonies that addressed the urgency of climate change and its impact on New Mexico; the feasibility of implementing the 5–page regulation; and the economic, health and social benefits of acting now to curb carbon pollution. Further, there was a significant effort to coordinate with diverse constituencies and partner organizations to produce compelling public testimonies. 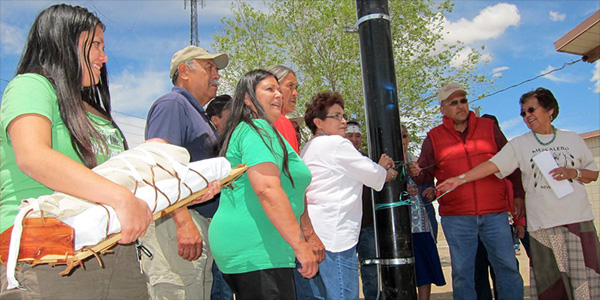 Hundreds of people state–wide testified vigorously and passionately: Mark Starr, a Veteran, spoke of climate change as a national security concern; Miguel Santistevan, a Taos farmer, Mayordomo, and PhD candidate, relayed stories from the ground: of seeds not sprouting and birds not coming to pollinate as a result of the changing seasons and temperature; and Tina Garnanes, a Navajo student, described the effects of pollution in the Farmington area—living in the toxic shadow of the coal plants. There were solar power employers, a strident and fervent team of youth change makers, people of faith, a Republican for the Environment, green business owners from Silver City, Albuquerque and Las Cruces, doctors, a local radio celebrity and many more. The fabric was multi–colored and multi–layered and convincing. Lisa Donahue, an assistant art teacher at Santa Fe Art Institute, delivered her spoken word and brought three lawyers to tears. Here are a few of her lines:

Winona LaDuke, an environmental activist, Harvard-trained economist, and educator aptly forecasted, "You could either be in the back seat of the bus and let everybody drive the choices, or you could make the choices ahead of time and ensure that you have a strong economy." Rick Sprott, Director of Air Quality under Republican governor Huntsman (Utah) said, 'the rule is among the most effective and efficient strategies I have seen to address global warming and climate change—the most complex yet compelling environmental problem of our generation. The results required for New Mexico under the proposed rule is what the science demands and could serve to drive national policy makers to act on the larger stage for global results." 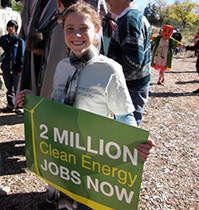 This carbon reduction law enables effective and procedurally efficient carbon pollution reduction that is legally durable and lays a crucial policy foundation for clean energy job creation and related economic growth. We have engaged and defeated major polluters and their lobbyists in the state Supreme Court and Legislature to maintain New Mexico's hard–won carbon pollution reduction law and prevent the rollback of other vital environmental protections.

New Energy Economy actively engages, educates and activates thousands of New Mexicans to effectively advocate for pollution reduction, renewable energy and job creation. We need to swell this interdependent movement. Together we will defend our right to clean air, water and land. Please visit our web site NewEnergyEconomy.org to see how you can get involved in our different initiatives.

We are back in the New Mexico Supreme Court, again, because PNM and Governor Martinez's new Environmental Improvement Board seek to overturn our carbon pollution reduction law. We succeeded in getting this law passed last year, now we must use the same creative chutzpah to push for its implementation, against PNM and Governor Martinez who seek only short term profit at the expense of our life and health.


Notes on Photographs: An album of 6 photographs of coal–fired power plants, coal's health impact, and solar energy in New Mexico can be seen here. Three of the photographs are by artist and Guggenheim Fellow Erika Blumenfeld. She made the photographs specifically to support New Energy Economy's campaign to end coal and we thank her for sharing these photos with us. This album was specifically prepared to accompany this piece.

Mariel Nanasi is Executive Director and President of the Board of New Energy Economy. Adopted in 2010, Mariel led the effort to establish New Mexico's breakthrough carbon pollution reduction program. When Governor Martinez refused to publish the rule, New Energy Economy sued her and won in the New Mexico Supreme Court. Mariel is also a civil rights and criminal defense lawyer. Additionally, she serves on the Board of the Santa Fe Art Institute. Understanding the urgency of a changing climate and wanting to create a healthy and sustainable future for our children, Mariel has made a personal and professional commitment to climate leadership.

This story first appeared in ClimateStoryTellers.org and is posted here with Subhankar Banerjee's kind permission.