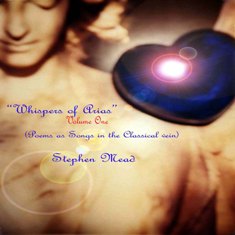 It's appropriate that Stephen Mead has named this double-album of poetry Whispers of Arias, because despite the layered, operatic music and big dramatic themes, these recordings, ultimately, sound very little like arias: The vocals are so tortured and quiet that one can't help but think of a ghost in a symphony hall, desperately trying to impress something upon the listeners, something dire, something unbelievably tragic. Stephen Mead reads (and sometimes sings) his poems over Kevin MacLeod's complex and sophisticated classical intepretations, and the effect is transformative—on the rhythm of the poems, on the meaning of MacLeod's recordings, and ultimately, on the listener. 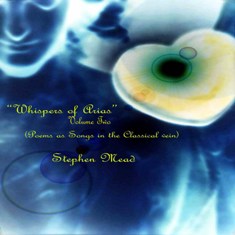 Stephen Mead says, "I began creating mp3 files somewhat by accident, or as an experiment. A few years ago I received a note from Frank Moore of Love Underground Visionary Revolution in regards to a few poems I mailed him. He asked if I'd be interested in recording them on a tape for him to play on his show. At the time I was just figuring out how to record my own voice and poetry as soundtracks for short collage-films I'd begun to make, yet the idea of using even a thirty-minute tape for a number of poems seemed like I'd be wasting a lot of tape time. I decided to add music to accompany my words, which eventually resulted in the CD Love Lullabies. In the past year I've moved to singing the poems entirely. Since so many of my poems are narratives, I've often thought of them sort of as choral, operatic or folk pieces, feeling influenced by such works as "The Umbrellas of Cherbourg" in addition to the librettists for John Adams and Phillip Glass. I thought I'd be working on yet another DIY project, (eventually entitled Whispers of Arias), but luckily came across Kevin MacLeod and his royalty-free music site, Incompetech.com. With his permission to use and play with samples from his site for this esoteric project, I've been fortunate to find a working collaboration." You can hear more of Whispers of Arias at StephenMeadMusic.weebly.com.

Check out these selections from Whispers of Arias: