After his signature intro he began the ukulele serenade. She'd taken to calling herself Betty again, just for the night, and drinking a dirty martini out of a dirty glass. Two others were in the women's parlor but they weren't much help. Doris was too busy scooting away from Rupert's (the Giant) pucker to slap the swoon out of her. Gus' vocals reassured "I'd rather be lonely than happy with somebody else" and his lies never sounded so good.


New Betty was a pageboy silhouette in a parked car loading a Smith & Wesson. For a few more minutes however, the past was the present and the Odd Fellows lodge was safe for old lovers and for believing forgotten words.

Los Angeles is not a good place to play dead. Safer to play a psychedelic go-go dancer or horror movie writer.

"Ah. Our next contestant. What do you think, dead or passed out?" Nadine dug her stiletto into the sprawling bum's thigh.

Trish hated this but didn't show it, her painted lips hovering over the derelict's face, "his eyes are kinda open but I can't feel his breath."

Nadine kicked his leg not convinced. Not wanting to waste any more bourbon on another dead. She tipped the casket-shaped flask pretending libation.

It was decided earlier in the evening over pancakes--black wigs dipping accidently into pools of syrup—half-conscious bums are the perfect portals. And not to another colorless city but to dream-soaked worlds. And no one would miss them anyway.

The next slumping mass lay under neon signs. It was Trish's turn. The toe of her white boot nudged the bundle of stains and wool. Her shadowed eyes darting up, down the street. Why was everyone in this town already dead? And why wasn't she? And why did she have to get this morbidly smashed to leave her apartment?

Skull-spinning, Trish crumpled beside the shrouded mound. Straining to see stars through light pollution, a sober thought stabbed: day or night, this anonymous body was the first to watch the sky with her, "It whispered something."

"Oh for Chrissake." Nadine sucked the last of her cigarette embers, stumbled towards the liquor store across the street.

Trish tugged the scratchy covers over her head and arms. Nuzzled her new friend. Lips plunging, drawing in anything contagious and pungent. She floated upside-down above clouds, away from 2AM murmurs, right up to the all-too-still angels. 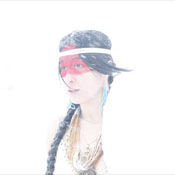 By second grade Eutemia was designing murals for her elementary school. She was also the recipient of numerous awards and heralded as a genius child. Then she grew up. Much to the disappointment of friends and family.

i always knew u were a genius child! great writing. keep the stories comin'

Your brilliance continues to shine.

Amazing that you can say so much with so few words!