sins of the father make a house           a Home so investigations
begin in earnest / start at dawn,

black implosion      within the confines      of a rose:
other things      you should know:      yesterday's gauze
reloaded:     conclusive idiot spread:     church that watch
luv;      impending bi-location same zip      you'll be both
coming to the rothschild     working the shallows     this
calendar.      kate never liked the sound      of that movie
asking "years      of silk road but      can you still feel
back through the string?"     from slow action round
recent curve      she was      well groomed half eaten.
your tale of undoing will ultimately be just another
from the lush bio-domes of los angeles a character
defaulting flooded
with ghosts firm
recollections of fair
albion all clogged
up with collage. 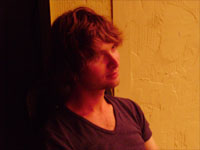 Billy Cancel is a Charleston-based poet/performer. He has been widely published in both the US (including Lungfull! Fact-Simile, 6x6, 580 Split, Indefinite Space) as well as publications in the UK, Canada & Australia. Billy performs in the poetry/noise band Farms & self-publishes through Hidden House Press. A collection The Autobiography Of Shrewd Phil was published by Blue & Yellow Dog Press in September 2010.