Economic growth is bad for the economy. Or more accurately stated, it is bad for individuals, good for the managers of large corporate and governmental institutions and large NGOs. They're sociopaths in my opinion. I know, that's pretty glib, and it's a matter for another day. But I'm going to claim the right to be glib, just this once.

It's hard to go against the current of the large corporations, large governments, large NGOs, so when environmentalists, what's left of us, get a chance to avoid taking on "growth" (which is largely composed of (a) the exploitation of nonrenewable resources and (b) growth of the human population), that's what we do. The fact is, there are limits to growth, but the folks who run corporations and governments and large NGOs don't want to hear it. So, for instance, when Norman Borlaug engineered the Green Revolution, the leaders of the aforementioned corporations, governments and NGOs announced that The Population Bomb was wrong. Long live Growth! They wouldn't hear Borlaug's other message, that he had given the world a 30-year reprieve in which to slay the "population monster." We didn't slay the monster. We adopted a conspiracy of silence on the subject of population. We went on talking about how we weren't "No growthers," allowing, for instance, the 3-decade US housing binge, capitalized on nothing but the American Dream, which is said ultimately to have resulted in the crash of 2008, from which John Q. Public has no end in sight.

Whenever population growth gets a reprieve, as it did with the Green Revolution, the big institutions get bigger, the population gets hungrier, more people grow up without any first-hand knowledge of the natural world, and the easier it is for the managers of the corporations, governments and NGOs to see people and the members of other species as fungible "things," rather than as living beings. That mindset is called sociopathy in some circles. And the Golden Rule, the common-sensical rule mouthed by all the world's religions, and just plain common sense in small communities, falls farther and farther behind, leaving sociopathy ever-more entrenched.

So at this point, the environmentalists, or conservationists as we once called ourselves, are largely in despair even though we have dug ourselves into this hole and have an obligation to dig ourselves and our victims out again. George Monbiot, who has long spoken for many of us, was saying a few days ago, "Collapse will come one day, but not before we have pulled everything else down with us." He seems to be right about that on the face of it, although why that means we should endorse nukes, as he says in the same breath,, defies understanding. As if hearing his words of despair, the UN promptly announced that the population was going to reach more than ten billion, five times the widely-accepted 2 billion maximum carrying capacity.

So there is an air of despair. But it is only the product of our own failure (or the failure of the large NGOs that have taken on our representation) to keep reminding the public that the limits to growth are real, that population is THE problem, that conservationists conserve, and that the Golden Rule, not sociopathy, is where our roots are.

Despair is both self-centered and self-defeating. At a certain point it is psychotic. Why? Take a deep breath. It is springtime, time of quiet renewal. This is really simple. We can't give up because these beautiful critters we live with didn't do anything wrong. And we are composed of the visions in our minds, and if all we have is ugly visions, we are deluding ourselves.

Let's open our eyes and breathe deep and slow. 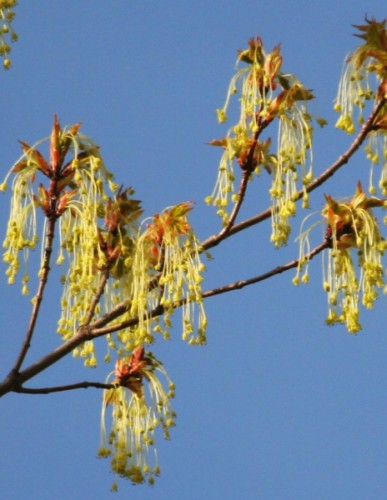 I got some grape vines and planted them the last few days along the fence inside of which my dogs are somehow expected to stay. Five different varieties, from a nursery in upstate New York. And one could take a break and look around at the wonders of nature, like this maple tree coming into flower. 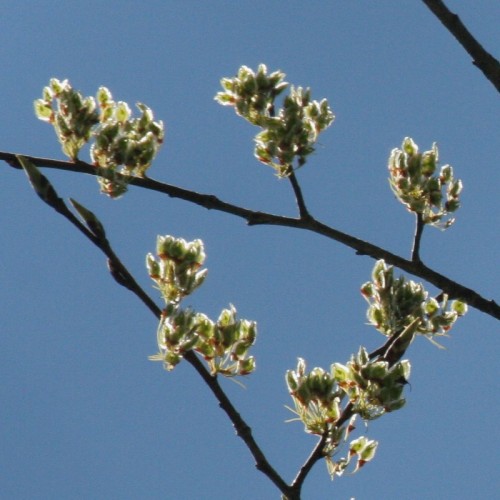 This is a cherry tree but whether it is past- or pre-flowering I'm not too sure. A few months down the line and this tree will be full of intoxicated robins. And we thought we were the only ones silly enough to carry on like that! Of course if the grapes thrive, there may be more of their fruit going to robins than to people, but what's wrong with that? 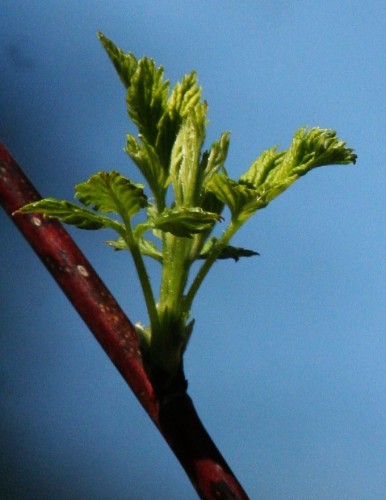 EVERYTHING is pretty in the springtime. This little one is a young blackberry vine, leafing out next to a would-be grape vine. 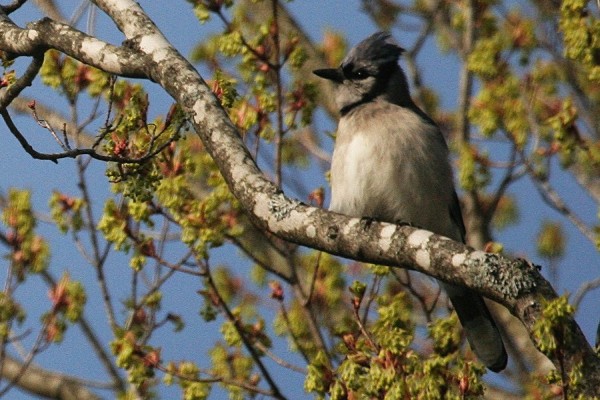 OK. No one needs to be told who this is. I thought bluejays were non-migratory, but spring is the time of arrival, so the jays have been getting into the act of arrival in a big way. Well it makes sense. It's better arriving home if you never had to go away in the first place. Much better to see an old place with a fresh eye than a fresh place with an old eye. 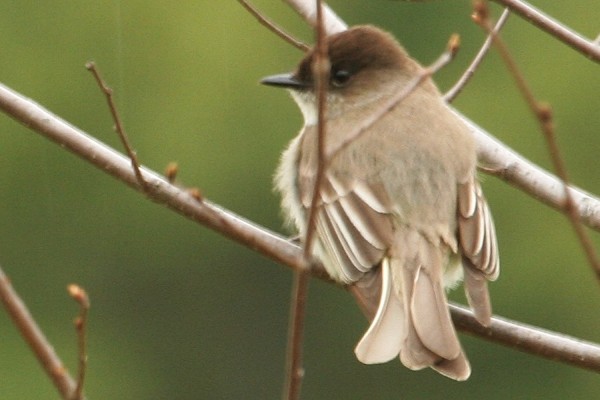 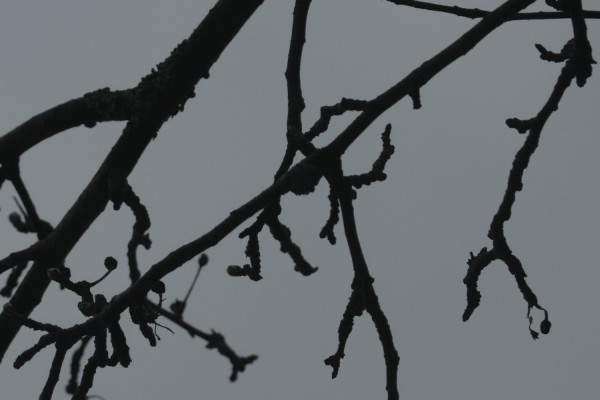 Apple twigs are picturesque, and the moods they put you into ever-changing. Right now it's an ominous mood, as in "rain is threatening." So now that I'm inside fooling with the pictures, the rain is helping the grape vines to settle in. And speaking of settling in, a very wet kitty is settling into my lap, but she's earned it. Just curling up purring is quite enough earning as far s I'm concerned but on top of that she's been doing security-guard duty in the barn. 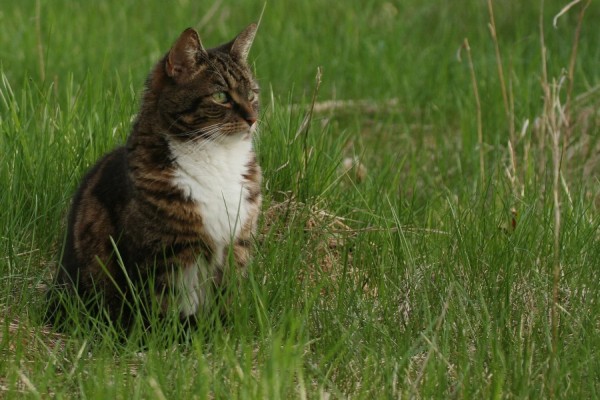 And here she is—"Meow." Ms. Eagle Eyes, in the spring grass before the rain. 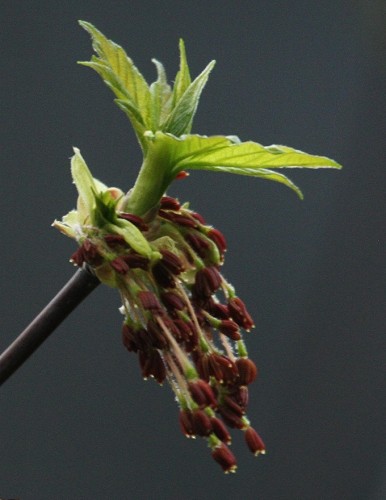 If my yard were manicured it might feel more civilized, but there would be less to see while planting grapes. Any idea what this is—a tree about five feet tall, twigs opposite, leaflets in threes like a blackberry? Maybe the leaflets will turn into maple leaves shortly. 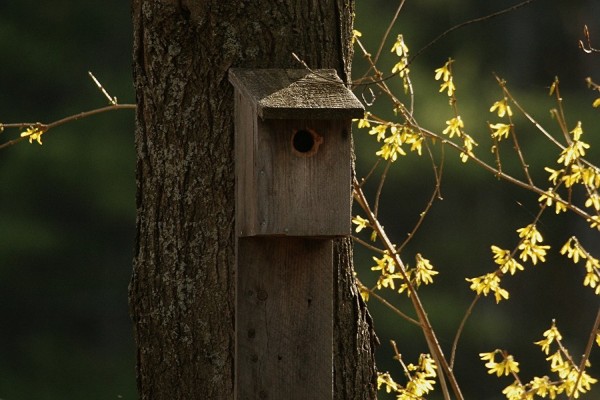 One of the birdhouses, awaiting occupants. It was a long winter, but there shouldn't be much more time to wait. Spring cleaning has happened in the birdhouses, the mayflies arrived with the tree swallows on May 1 (My, aren't we orderly?), so all we need is little ones to help eat mayflies, which as always promise a bumper crop.

That's my report. And Meow's.

The author and amateur photographer, Nicholas C. Arguimbau is an attorney from MA, licensed in California, with a physics BA from Harvard. He can be contacted at narguimbau@earthlink.net.