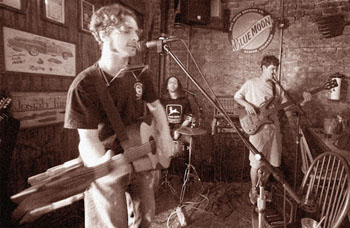 The Train Wrecks have only been releasing music for the last three years. That isn't terribly noteworthy until you actually sit down and listen to a song like "Desert Gunfire." It's not just a great piece of lyrical storytelling, well within the traditions of their musical heroes. The song is a well-tuned and well-played blast of old-school country and blues. There's also just enough southern rock to give them a sense of sincerity in where they come from and what puts so much energy into those vocals, guitars or harmonica.

"Desert Gunfire" is their most accessible track. It's the kind of thing that's going to stay catchy in spite of what you think you know about this kind of music. The song never hides the history that's created it. Instead it celebrates those other songs that helped put it together while retaining that originality that's so essential to its success. Nostalgia is fine. Plenty of that can be found in the foot-stomping fury of "She Was the One," but lead singer Jason Bible and the other three that make up the group know better than to simply rest on what they know their audience will like. The kind of people that know what they like and know they like this are already coming to the show. The Train Wrecks don't need to worry about them, even though these songs are written with them in mind first and foremost. The people they want to grab hold of the most are the ones who have made up their mind long before they've even listened to them.

Some might think this isn't their kind of thing. They make the mistake of assuming that guys like The Train Wrecks can't offer up terrific words backed by some powerful, creative musicianship. A song like "Isaak" should change their mind in a hurry. In less than three minutes, "Isaak" manages to be a wistful, strangely sad story that's also funny as hell. The furious bit of blues and country also puts the best of their musical talents on the strongest display possible.

The Train Wrecks could very likely be successful in any genre they want. It's a sense of potential that runs through any song of theirs the listener is fortunate enough to experience. That's another thing that makes their music so very worth the time. To hear them is almost the same as actually seeing them live. Energy is rather important to making these songs retain their necessary honesty. Jason Bible, Eric Dunn, Markus Kuhlmann and Stuart Harmening each create that energy with room to spare. Not a moment seems like an act or some desperate attempt to put together the right image to accompany the music. Without ceremony or a marketing campaign The Train Wrecks launch into their best material and never bother looking back. The listeners who already know what they like will pick up on that in a matter of seconds. The rest of the room will take a little longer to get there, but they will. Guys like these are almost daring you to take a listen and then still admit you don't normally go in for this kind of thing. Doing so will prove to be rather difficult but also a whole lot of fun. —GR 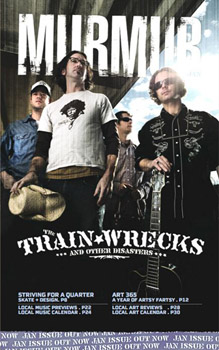 The Train Wrecks offer up raucous and rollicking Americana that's as equally indebted to the traditionalist legacies of A.P. Carter and Johnny Cash as it is to the forward-thinking rock & roll of Wilco and Lucero. The band completed the recording of their debut CD Whiskey & War and released it in the fall of 2007. In the time since the band's inception they have gained rather than lost momentum. The band is currently recording and fine tuning their new music to be featured on their next full length studio release. Through their touring and recording, The Train Wrecks are climbing to the top one hard hitting live show at a time. The group is comprised of Jason Bible (guitar, voice and harmonica), Markus Kuhlmann (drums, voice and guitar), Eric Dunn (electric bass, upright bass and voice) and Stuart Harmening (dobro, banjo and guitar). All four bring their own unique perspective and talents to the table to create a singular musical vision, one that they hope to bring to as many people as possible as they continue to tour tirelessly and passionately.

The Train Wrecks Say: "What would happen if A.P. Carter, Hank, Sr. and Bob Dylan loved up on each other and created a bastard child that likes to rock? Think bluegrass, rockabilly, ragtime, and Americana with a rock 'n roll presentation. I feel that the new record will showcase more of the live feel of the band and how we have grown as performers. I think the folks who liked the first one are going love the new songs on Devil in the Rear View Mirror!"

We are proud to present three songs by the Train Wrecks: