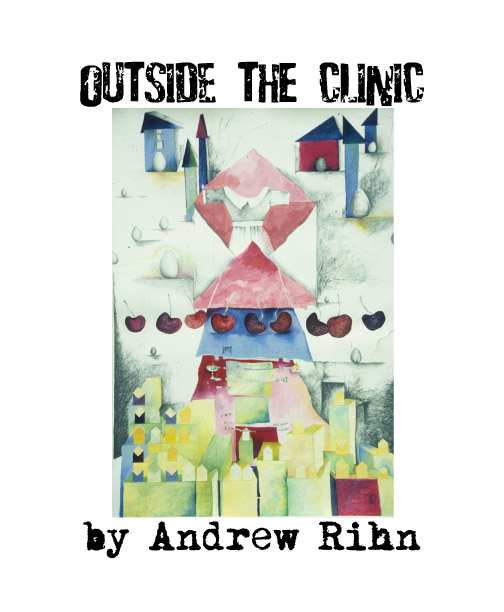 In 2009, we of Unlikely ran The First Annual WRITE REAL GOOD Poetry Chapbook Contest, judged by Michael Harold, Anne McMillen, and Belinda Subraman. Outside the Clinic was the second-place entrant, "losing" by a fraction of a point. Although we didn't have the budget to declare two winners, we knew that we couldn't let this outstanding manuscript go unread, and were delighted when Andrew Rihn agreed to let us to run it as an e-book, available for free download. Sculptor and painter Carey McDougall created original cover art for the volume, and it's our delight to present it now.

Outside the Clinic
for screen viewing, 2.0 megs

What people are saying about Outside the Clinic:

"One of the best books of political poetry I've read in ages, Outside the Clinic takes a profound look at the abortion question. It is an insightful and intelligent collection, which dares to examine the fertility issue from a responsible, male perspective. If only the world could look through Andrew Rihn's eyes, there would be less need for shrinks and anti-depressants. The book speaks truth. What more can I ask for?"
—Nin Andrews, author of Midlife Crisis with Dick and Jane

"The American debate about abortion and contraception is too often conducted with shouting, anger and violence. Outside the Clinic is a powerful and unflinching look at these issues and those who stand on either side. It reveals everyday truths that are often drowned out by the politicization of abortion. It looks beyond the commotion and into the heart."
—Kellie Copeland, Executive Director of NARAL Pro-Choice Ohio

"Andrew Rihn has written a smart, well-constructed, politically incisive collection of poems. Their various formal approaches and range of speakers represent the a complete engagement of the poet in the fraught and dangerous environment in which reproductive health workers function."
—Kazim Ali, author of Bright Felon: Autobiography and Cities

"In Outside the Clinic, Andrew Rihn explores the hypocrisy and dangerous zeal of the religious right which threatens us all. This strong collection of poems is vital in its reclamation of language and its insistence on sanity and justice at a time when it is increasingly rare."
—Al Markowitz, editor of The Blue Collar Review

"Aware that the objectification of women is historically steeped in legislated (and otherwise) control over the female body, Andrew Rihn addresses women's reproductive rights and the murder of Dr. George Tiller in these surprising poems that take their place on the side of indignation over injustice and the assertion that in America women's rights are also human rights."
—Leigh Herrick, author of Just War

Andrew Rihn has worked in fast food, retail, and landscaping.  Additionally, he spent three years as a university writing tutor.  He has conducted writing workshops in a local domestic violence shelter and has volunteered as an abortion clinic escort. He is the author of several slim volumes of poetry, including the forthcoming titles Foreclosure Dogs (New Sins/Winged City Press) and America Plops and Fizzes (sunnyoutside press). He lives in Canton, Ohio.