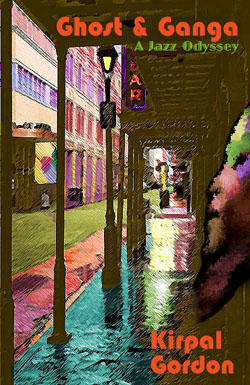 If Kirpal Gordon had written Ghost and Ganga as anything besides a book it would have almost certainly been a movie musical. Keep in mind though that it would be a musical unlike anything seen before. It wouldn't be some Technicolor masterpiece like those movies from the 50's. Ghost and Ganga would not be a wildly over-the-top exercise in excess and elaborate visual gestures. It would be simple, wonderfully strange and as striking and memorable as anything from what we know a movie musical to be. Putting his creation out as a film instead of a book would have been a lot more straightforward than what he wound up doing. There's doubt it would have been a lot easier. That Ghost and Ganga brings to mind these thoughts with nothing more than paragraphs, sentences and words is at first unbelievable. After that it's just stunning. By the end it makes all the sense in the world.

There are three novellas to be found here. All of them are pretty short—the entire book is a mere ninety-five pages. You could probably get through the whole thing in just a couple of hours. That doesn't leave a lot of room to repeat yourself or stutter your way into early retirement. Gordon's career has spanned numerous creative endeavors and genres. One of his most successful has been poetry, so it's logical that he would be so proficient at knowing how to avoid wasting his time or ours. It's important to keep that poetic influence in mind. Even more so to remember how much of a background Gordon has in music, particularly jazz. When you apply this knowledge to Ghost and Ganga everything becomes a lot clearer. Each of the three novellas enjoys a different approach, but they still retain numerous features that unify them as one impressive body of work. They are all rich in dialogue and a narrative form that often feels more like a free-forming instrumental than something in a strict literary tradition. All three stories also relate what is likely Gordon's personal philosophy on music, love, lust and spirituality, particularly how all of those things tie into each other. Most importantly all three feature two characters who have likely been waiting for a writer like this to come along for years. Imagining Ghost and Ganga haunting a thousand different songs is not unreasonable. At times they don't even feel like new characters. It sometimes seems as though they were around long before their stories were finally put into print.

Ganga is the focus of "Ganga Runs the Voodoo Down", "Raid Kills Bugs Dead" and "Come Sunday." She is Gordon's heroine and focal point for his perspectives and attention to such a creative, original form. Our introduction to her is certainly memorable. When she greets us at the top of "Ganga Runs the Voodoo Down" she is already so far into her own world that it seems impossible that we could ever catch up to her. Dressed as Billie Holiday, draining beers like a drunk after twenty years on the wagon and discussing a recent hostage situation she created with a local DJ, she is already a well-devolved, richly fascinating character. We get more information as the story progresses and then moves on into the other two. By the end we have more than enough back story, motivations, personality traits and opinions to give Ganga (and Ghost to a lesser extent) all the depth she needs. It almost doesn't seem necessary. Gordon is so confident in the strength of his character and her story that it feels like he simply steps aside and lets her run the show. Of course that's not the case. There's no doubt that Gordon is a tireless perfectionist who probably spent eons carefully constructing Ghost and Ganga. He doesn't make any of the stories seem overly complicated in their execution. He doesn't have to because it reads so well that we assume it came easy to him. What needs to be kept in mind is how expertly he constructs Ganga. Very quickly he establishes her identity and tells us everything essential to who she is and what we can expect from her. The entire book is like that. Every sentence, every flurry of dialog between two characters (the exchanges between Ghost and Ganga in first novella are quite possibly the highlight of the entire thing) is carefully made to look like it's moving much faster than it really is. In reality Gordon is giving us everything in those ninety-five pages that another writer would give us in five hundred and ninety-five. This is perhaps most distinct in "Ganga Runs the Voodoo Down." It may well be the most accessible and enjoyable of the three, which is saying a lot. Each page is a frantic car ride through crisp dialogue, surreal imagery and tense eroticism. At no point does it relent or even relax. You're going to be pulled in at the first page. There's no question of that. Don't be surprised if you find yourself overwhelmed by the proceedings more than a few times. That should be half the fun.

The trend continues in "Raid Kills Bugs Dead", which details the circumstances behind Ganga's flight from India to the United States. The story retains Ganga's captivating personality and humor, but it goes about its storytelling prowess in a much different way. Whereas "Ganga Runs the Voodoo Down" was a fast-paced road trip through sex, conversation, jazz and felony, "Raid Kills Bugs Dead" is heavy on narration and personal beliefs. None of the story is sacrificed. It just feels like a few tangents were worked into the proceedings while we weren't looking. "Ganga Runs the Voodoo Down" dropped into us right into the getaway car with Ghost and Ganga. We get about 1/10th of a second to catch our breaths and get a handle on what's going on. "Raid Kills Bugs Dead" takes up roughly as many pages as its predecessor and yet moves at a somewhat slower pace. Gordon takes a little more time here. The story not only lends further depth to Ganga, her history and motivations, it almost in a way seeks to explain the overall literary style Gordon is going for here. More than any of the other two stories "Raid Kills Bugs Dead" feels like that free-forming instrumental put to actual words and dialogue. Putting this one in the middle is reasonable. The first story gets us rolling and (correctly) assumes we can go just as fast as it can. The second story slows down just enough to give these characters an even more well-rounded sense of urgency and force. Throughout both the narrative twists and turns so often we learn to hold on and just accept this kind of chaos. The concept of "anything is possible" is a standard literary trick. Especially when someone is looking to get something different out of the medium like Gordon does here. It's in how much Ghost and Ganga celebrates chaos and uncertainty that makes it a pretty good time. So much fun you might not even notice how much Gordon is accomplishing here.

The third and final novella, "Come Sunday" is not what you might have expected in a climax to a book like this. Once again it goes about telling the story in a manner somewhat similar but still quite different from what we've seen so far. The emphasis is once again placed on narrative, only this time the focus is almost exclusively on how significant the relationship between Ghost and Ganga really is. We get a pretty clear sense of that, but nothing sharper or more compelling than the thoughts and memories Ganga entertains. Final evidence that she is far more than a cute gimmick or a one-hit wonder is given here. The same can be said of Ghost, but the bulk of the attention is still trusted to Ganga. It's entertaining and absolutely impossible to ignore. The only thing better than that is the knowledge that it doesn't have to stop here. Characters like Ghost and Ganga can often have more to offer than an author's lifetime is capable of detailing. With little effort Gordon could revisit his characters again and again. We can only hope for the best, but there is one certainty in all this. Gordon will be visiting the style he has set forth in Ghost and Ganga again soon. Don't even question the idea. It's going to happen. We can be sure enough that it should be just as good as this, perhaps even better. Because it all comes back to the kind of music he describes throughout the three stories. Those artists built careers on taking their last idea and expanding on it in ways that were small universes of creation and art unto themselves. Imagining Gordon being capable of the same accomplishment in his own way is not difficult. Ghost and Ganga ends on a strong note, but we never once forget that it remains a pretty big world out there. That's the best kind of ending.