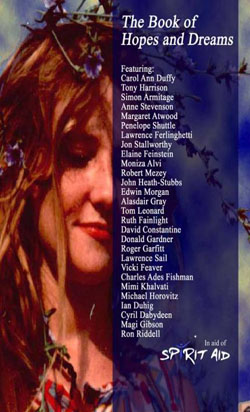 It's easy to be overwhelmed by the sheer volume of causes and humanitarian efforts that are out there in the world today. Anyone with a few socially-conscious friends on Facebook can't go more than a day without being hit by every desperate bid under the sun. For most of us it's not that we don't want to be made aware of these things. It can just be a little difficult to get a handle on where our energy would be best spent. Spirit Aid and their efforts to bring some semblance of relief to the war-battered citizens of Afghanistan is just one cause. You could do a lot worse than to put your time, faith and money into their work.

Writer/Editor Dee Sunshine has worked as hard anyone in Spirit Aid to promote their cause. His efforts have led him to put together The Book of Hopes and Dreams. The book is a collection of poetry with hopes as high as those of Spirit Aid itself. Sunshine and the collection he has so skillfully woven together seeks to both educate and showcase an assortment of writers and voices coming together under a very old, very unfortunate guise. We say that war is hell. We know that the consequences of war are many and long-lasting. There are countless decades of poetry and art speaking to this. You will never run out of films, photographs, paintings, songs or books on the subject. Poetry is just one of many mediums. What's unfortunate is how some people seem to have forgotten a poem's ability to capture something like war with as much power as any visual endeavor. It's an old lament for those of us who still love poetry. One that you will express often as you read through the stunning pieces collected in The Book of Hopes and Dreams.

You don't necessarily have to be anti-war to be affected by some of these poems. It will however be very difficult to shake off the introduction from actor and Spirit Aid founder David Hayman. Hayman is not a writer by trade and makes no attempt to be. He lays some very simple, brutal and effective groundwork for the poetry that follows. An account of one of his more recent trips only occasionally delves into personal politics, if that sort of thing bothers you. The book makes no bones about its opinions on the politics behind the war in Afghanistan, but it also knows that there are far more important matters than a one-sided political debate. Most of his introduction deals solely in the suffering of people who really have no concept of politics. They just wouldn't mind some food, medicine and a life expectancy higher than that of Europe during The Middle Ages. Hayman's words are basic, straight to the point and effective because of that. They set the tone for the actual writers to do their thing. Some of them do that extremely well, presenting some of the best work of their careers. Ray Succre is a good example. He has been written numerous novels of some pretty substantial brilliance. It just happens to be that he's also a pretty damn good poet, too. His piece "A-ceremonial" proves that in beautiful form. It's a simple poem that doesn't take very long to dig its nails into your consciousness. The imagery is direct with a form that wraps itself around the words with the talent of a writer who never once hesitates in what he wants to say.

Most of the poems in The Book of Hopes and Dreams are like that. The book is a mere one hundred and forty-eight pages. Within that page count there are ninety poems, an introduction from Dee Sunshine (whose contributions to the collection, "Dreams Eclipse Reality" and "Tindersticks" are superb) and the introduction from David Hayman. There is no room here for any verbose mediation on war and its unending, ghostly line of victims. The poems are quick, uncompromising little things. Each in its own way seeks to accomplish in a few choice lines what some writers need an entire book to explain. That every single one of them succeeds in this attempt is remarkable. Finding a collection of poetry from so many unique writers and not having a weak piece in the bunch doesn't happen very often. At least one poem in all of these is going to completely shake you out of your comfort zone. The way good writing always should. All of them should hold some interest, some appeal, but it's a guarantee that one poem in the lot will demand your attention through several readings.

There's no telling which poem that might be. This is a single source that holds many different perspectives, each pointing towards the same hope and purpose. That alone is impressive enough, but it's even better to also know that one poem in the collection will speak to your very basic sense of right and wrong like no other. For some it might be David Gardner's beautiful, dreamlike "In the Alder Thicket." It tucks you under a wing just slightly larger than the sky itself as it flies you over and through its breathtaking imagery. To say nothing of Gardner's wonderful attention to a simple but striking style. It might be Edwin Morgan's wonderful "Trio." Besides being another strong example of the freedom offered by a seemingly unending assortment of poetic forms, "Trio" also makes for some pretty compelling storytelling. By the end of it you probably wouldn't mind knowing where the trio in Gardner's story is heading to next. The book is filled with similar surprises throughout.

Ninety poems in all, and the possibilities for what's going to appeal to you and why are endless. They speak of a world that isn't necessarily all about war. It's true that each poem is flatly against war and the tragedies it so casually leaves in its wake. But it's fascinating how many of the poems don't necessarily take a direct approach to the writers' opinions on the subject. Some, such as Alasdair Gray's "To Tom Leonard" protest war by bringing attention to what makes a world a place undeserving of such a horror in the first place. The poem and countless others in the book shine their creative light on the little things that are often lost in our frantic desire to understand the big picture. Jan Osker Hansen's quietly remarkable prose piece "When Flies Sleep" is another good one, although you might think Silvia Kofler's "Dangling" is an even better case in point. No one is wrong in their choice for a favorite. No one poem is more brilliant in its purpose than the other. How these words affect you will be an experience unique unto your own memories and feelings. If nothing else it opens the floor to plenty of discussion, should you happen to run into someone else who has read this.

The little things captured so well and so often throughout the collection may be the book's greatest strength. If we walk away from these words and find ourselves appreciating something or someone in our own lives, then it's not an entirely depressing thought. It is in that thought that we might be compelled to think of what we can do to protect what we cherish. We might also start to look towards those in the world who have been affected by atrocities we can't begin to comprehend in our own lives. That's where an organization like Spirit Aid might come into the picture. Their continued existence and work is dependent upon our attention. Something like The Book of Hopes and Dreams can and should draw that attention. At the same time it is a collection of verse that will not fail to satisfy any purely-literary interests. Strip away the politicians and any noise from the twenty-four-hour news networks, and you're left with the basics. You have some ninety poems of considerable weight. You also have a country of people who just want to the pieces back together. It's as simple as that. The Book of Hopes and Dreams thrives in both of these areas. They take the simplest approach to their goals and leave us with one of the most necessary poetry collections of 2010. That's not too shabby for a hundred and forty-eight pages.