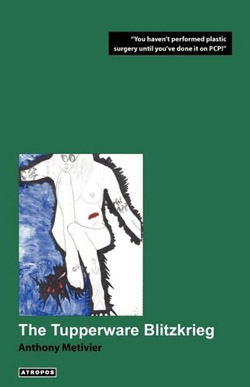 Despite the vehement crackle that corrects the flaccid errors of more tired pens and their offerings, there is in Metivier's maniacal text a hurdy-gurdy undertone which peaks and swells with episodes involving the intentionally preposterously named characters of Mr. Enlargement, Dr Gravity, Dr Fuse Less, Dr Umbilico, that make up an entire ensemble that alternates between the lucid and the absurd.

To summarize the plot would be perhaps akin to summarizing a life: it can be done, but not easily, and certainly not in a way that will be a fair representative with fidelity to the complexities. Played out in the tension between want and need, conscious intent and unconscious demand, we find Jesus and his untimely return mixed up with a nefarious plot to kidnap the US president. Meanwhile, the resident character Dunker Doer loosely based on filmmaker Michael Moore is chasing the now personified Lady Liberty who is on a destructive rampage subsequent to being impregnated by Jesus and robbed of orgasm—a situation that only Mr Enlargement can resolve, but according to his own designs. Meanwhile, the cast of surgeons who all indulge our need for the cosmetically frivolous have themselves raised their own frivolity to a serious precedent for exploring arcane activities and pursuing bizarro theories. The "villain" who problematizes all plot relations in the story, Dr Umbilico, seems to shoulder for supremacy with Dr Fuse Less for the role of...well, one would have to imagine a crooked breeding experiment between the characters of Falstaff and Kurtz. What I fail to mention are all the details, and it is these details that make the necklace that this story adorns. Psychoanalytic application run amok, a recurrent discursus on PCP and its relative benefits to performing surgery, the ghoulish exhumation of bodies for necro-carnal purposes, a little dash of the spy novel's predilection for double agentry which then doubles on itself, and of course all of this marshaled under the banner of just how ridiculous and impossible the construction and careful maintenance of characters in novels can really be. The stochastic circumstances in this novel would not permit any security or consistency of any of the characters who are shot through by a kind of mystical-medical bullet that set them all off from the starting line sometime long ago, and we the readers are as confused as the characters as to the scope and direction of the racetrack. For all the high-minded or villainous plans the characters make, banished is that tacit arrogance found in so many other novels of the character seemingly imbued with the author's foreknowledge of plot. Instead, Metivier's assembly of characters are actors given blank scripts and not told where to stand.

Metivier turns each phrase carefully on a lathe, but it is not to fashion some smooth-varnished narrative, but instead he builds into each a treacherous notch, a jagged edge. Metivier does not cut his phrases like Victorian table legs to support the bulk of our readerly indolence with their polite aesthetic. There is something in Metivier's work that has the whiff of the "lapidary style" to it, but it is not the mere ornament that comes with the drainage of Bourbon era writing, nor the flowery emptiness of the Victorian that masks its uncertainty and scant character with stolid phrasings meant to merely occupy rather than energize pages.

Character development is tossed aside and cheekily reintroduced only as a demonstration of how the very cliche of development will fail. There is no doubt that Metivier is an uncanny parodist, and one would be hard pressed not to draw the crude parallels to a few actually living people. But this, too, is a ruse, and it is difficult not to be convinced of these convenient parallels. The true entertainment, however, is when we are led along so far in making these fact-fiction links only for the novel to dissolve all bonds and leave us stranded with—in psychoanalytic terms—our own guilt at trying to recollect ourselves by the narcissistic act of collecting the set of clues in that impossible return to the oceanic. Our own constitutive misrecognition is thrown back in our faces when the characters demonstrate their unruly unwillingness to conform to our imposed expectations.

We should not let this review orbit around the themes it playfully offers since thinking thematically is the undoing of our literary enjoyment. But, the novel also urges us to sabotage our own enjoyment by exercising the laziness of selecting themes for closer inspection. The bete noire monstrousity perhaps inherent to the very acceptance of unnecessary cosmetic surgery reaches its pitch in a monstrous black comedy and the ethics-defying acts of aggrandizement and play. What brings this modern Gogolian farce to fruition is Metivier's flouting of the modality between the possible and the necessary, and so for all the absurd leaps that overtake conventional social logic, we find ourselves in a narrative that is entirely—and frighteningly—plausible.

Described as Metivier's most accessible text, one could take issue with such a paltry designation which carries with it the tacit assumption that accessibility is what makes a text delectable reading in a viciously robotic page-turning celerity. This is hardly the kind of book one reads to "be done with" and move on to graze through the next. The movement here is one that changes all the administrative officials of art house and all its in-patients to become a veritable mad house.

Anyone who is too lazy to ride the bumps and road-spikes of Metivier's trademark metier for the absurd, the violent, and the intentionally cheeky irreverence of his prose perhaps ought to be barred from the contemporary domain of letters altogether. What is it that inspires such an injunction if not the infectious nature of Metivier's book itself? As soon as I thunder-clapped eyes on The Tupperware Blitzkrieg, I knew it wasn't just another cheap literary boob job, and certainly not another empty confection or superfluous cosmetic decoration that spans the vast wasteland of trade pulperbacks. Metivier's critique knows when to apply its fang-job on society and politics, but the truly left-handed brilliance of his critique is in the deft and surreptitious way he sets a firm literary precedent for craft over what he calls "crapht". One has only to navigate with a reckless appetite through Metivier's plot and narrative hairpins.

Tupperware doesn't bother itself with mollycoddling its readers with patient character development, a doily-style plot structure, or the maundering whimsy of the woeful poet. Neither is it a fizzling petard of intended literary revolution. Therein lies the real difference: Metivier is perhaps a pragmatist when it comes to innovation, preferring to show a concrete example of how it is done rather than drawing up endless manifestoes on how it will one day be done. Yes, in all actual fact, he is no conceptual artist weighted down with reams of documentation and process notes, no hopeless phenomenologist who can't seem to ever get beyond grounding and re-grounding a project that never seems to get beyond the incipient stage.

The style of his narrative is not bricked up with inaccessible expressions, loaded with empty ornaments to make it look more decorous and Victorian than it actually is, and not some sort of repose that will gather literary critics who mitigate their own jealousy in not having themselves been the author by means of endless analyses on the profundity of its themes. In short, the book is dirty, real, violent, alarming without being a spectacle, and only abides by convention when it is convenient to the author to do so. It can be classified as a "guilty pleasure", but not because it is a pseudo-cultural opiate; it makes us feel guilty because it develops our capacities—and a robustness in reading has quickly become a thing of shame and guilt. It is not that the book makes obligatory allusions to the canon to aid poor memory or grant us a lateral and indirect education in literature, but that it has this very curious quality of anesthetizing our tired expectations and surgically removing the malignant impediments to the very possibilities of a book, a narrative, a subject, and a theme. We become, much like Dr Fuse Less' patients, "fact-lifted" to face the overpowering consequences of literary conventions unbound.

We learn with Metivier what it is to write as well as to read. Good readers are as scarce as good writers, if not more so. The reader of this review essay is invited to inspect any of Metivier's offerings and find even one resigned appeal to contemporary literary convention. The very dullness that is found in the populist, award-winning books of today, masquerading as sophisticated rather than a terrible repeat of ersatz modernist devices is entirely dispelled in Metivier's books. But neither can his books be ensconced in that elitist and largely vacuous term of "postmodernism." Metivier does not reject structural literary conventions for the mere quasi-political sake of "being different" or as a thinly veiled proselytizing of revolution. No, Metivier's style and delivery are solid, the result of a technical mastery that far outpaces any writers with their whimsical notions of invention—which is strictly a petulant affair of sloppy revolt with only a hazy idea of who or what the target enemies are. Without at least some involvement in what can be called formacion in literary history, and without a critical and exploratory eye on what is currently in literary fashion, there is no ground for revolution since such a thing cannot be sustained without knowing the sequence: origin and derivatives.

A writing that is tortured and twisted without purpose is simply a clumsy braid or a failed arabesque. The unacknowledged (until now) precedent to reading Metivier in terms of style alone would be to do so through the lens of Gogol—arguably the most capable weaver among the Russians of that period, and certainly lighter in spirit than the plodding and heavy rhythm of Dostoyevsky. This comparison between Metivier and Gogol is no mere accident, but this writer would ask the reader to consider the experiment in bringing the two together under keener focus than this space would allow. Metivier's contemporary counterpoint would be Will Self—not because they are antipodes or that either is more or less gifted than the other, but owing to the very fact that the hidden smirk in their respective narratives appears on the opposite sides of the written face. The reader ought to submit to reading Self and Metivier concurrently, especially Self's Great Apes or his short story collection, The Quantity Theory of Insanity.

In terms of literary Canadiana, Metivier is yet another exceptionally gifted observer and author who will find no safe port of call in what is predominantly in vogue in CanLit. Metiver's prose is far too lively and adventurous, a comedy folded within a critique, compared to the more staid and lugubrious—if not passive and sentimental—style of writing currently afflicting the Canadian literary landscape. It is with dourness and guilt that bestselling Canadian authors conduct their prose observances, a "polite realism" that generally appeals to the type of reader who doesn't want literature to make him or her too excitable. How can we not commit ourselves to the possible conflation between polite realism and populism? If anything, such ad populam bilge is indicative of modernism trying to make amends for its many outbursts, begging our pardon for its youthful excesses, exuberance, and committed atrocities. This is where the difference actually is in this work by Metivier, along with his other offerings: a refusal to apologize.

Kane X. Faucher is a doctoral candidate at the University of Western Ontario's Centre for the Study of Theory & Criticism in London, Canada. He has published in several academic and literary journals both online and in print. He also has published three novels, Urdoxa (2004), Codex Obscura (2005), and Fort & Da (2006). His web page is at http://www.geocities.com/codex1977.