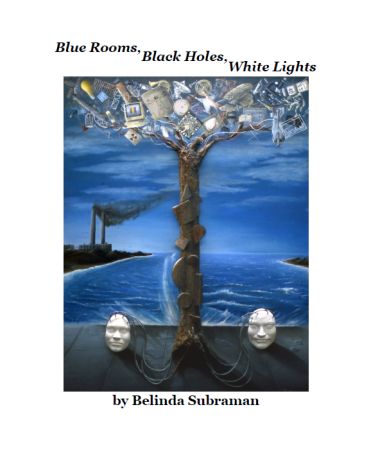 Unlikely 2.0 is priviledged to present the resulting book of poetry, Blue Rooms, Black Holes, White Lights. It is not an easy book of poetry to read. It is easy enough to understand—though Belinda's extensive poetic education is clear, this is essentially plain-language poetry, written to be accessible by anyone. But Belinda's brutal analysis of her grief brings the reader's own tragedies into sharp definition. The book mercilessly explores the author's most painful memories, and aspires to share the most fundamental aspects of human experience with the reader. It is by turns discomfiting and comforting, in the way that great poetry is meant to be.


The films on this page are .wmv files, designed to run in Windows Media Player. They should play automatically on Windows machines. If you have a Mac, you might need to download Media Player for the Mac. They require a high-speed Internet connection.

I have been an enthusiastic fan of Belinda Subraman's work, and of her as a vibrant person, beautiful in all respects, for more decades than I care to calculate. The death of her father (and her vocation as a nurse) have occasioned these powerful meditations on mortality, our place in nature, and the wisdom of the Buddha. Reading them made me reflect, 'Maybe Belinda is the Buddha and doesn’t even know it.' Who else could write, 'Every daisy-headed/piece of the sun/every tree hair/blooming its brains out/knows more than a Buddhist.' That is a true poet bringing inspiration, originality, to a perennial subject. I read these poems with affection, admiration, and the satisfaction of having followed her career from its wonderfully girlish origins to this Siddharthian arrival.
—Gerald Locklin, author of Go West, Young Toad and Candy Bars

"I hate and love heartbreakers. They get us. Belinda Subraman's poems are honest in a dishonest world. She is victorious but I worry about how a great soul will survive without us admitting her talent, focus, and great determination. She defines the word celebration."
—Rane Arroyo, author of The Buried Sea and The Roswell Poems

While living in Germany in the 1980s Belinda began Gypsy Literary Magazine and Sanctuary Tape Series, which published writings and vocal performances of poets from many countries. Living on the US/Mexican border she ran Vergin' Press, publishing books such as the anthologies Voces Fronterizas and The Gulf War: Many Perspectives. In 2004 she resurrected The Gypsy Art Show on the Internet, featuring interviews with poets, authors, musicians, and activists. Her web site, BelindaSubraman.com, serves as a focal point for her recent work. 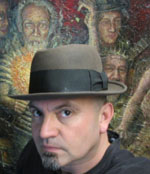 César Ivan is a multimedia artist whose work has been exhibited in the El Paso Art Museum and in solo and group shows in various venues in the Southwest, including public spaces in the museum district of downtown El Paso. His influences range from da Vinci to contemporary culture. His commercial art graces the entries of homeless shelters, cafés, and other businesses. Additionally, Ivan is a gifted multi-instrumentalist, whose musical career has ranged from rock 'n' roll to afro-Cuban to flamenco to original world music.

Saw you on facebook, I didn't know you have a book out, like me. I'll pick it up one of these days.