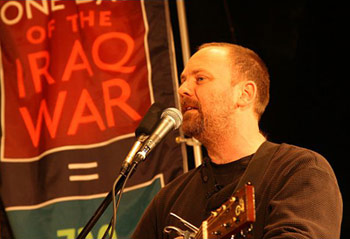 There are two things I tend to keep in mind when considering the work of someone who falls under the broad headline of protest artist. First, I think the best songs are the quiet ones. It's good to have a point. It's also obviously good to be passionate about that point. What doesn't work is when that passion overrides musical common sense. Screaming, ranting and any delusions of persecution that cross the line from "passionate" to "troubling and vaguely disconcerting" generally keep me away.

The other thing I often look for is the storytelling. Anyone can bitch about the government or the desperate times we manage to live in, put it to an acoustic guitar and call it a song. It takes an artist with talent and loftier goals than seething to create something with a compelling narrative wrapped around whatever issue happens to mean the world to them.

David Rovics doesn't have a problem with either one of those two points. You can find that in the steady, strong voice and lyrics of his newest song, "In The Name of God," written in response to the recent murder of abortionist Dr. George Tiller. The song never loses its main purpose of educating and informing. It also never loses sight of how important it is to present the facts in a tightly written narrative. Rovics infuses the emotion of the song with a sense of longevity. Long after the public has forgotten the name of Dr. Tiller, the song still has a chance of reaching people on its overall message alone. 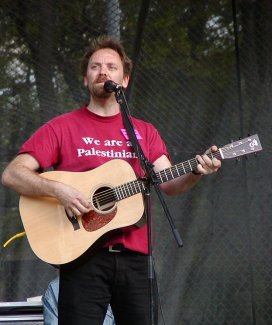 Rovics applies this philosophy to all of his music. You can find evidence of his power as a storyteller all throughout his latest album, The Commons. Breathlessly dedicated, intelligent songs like "New Orleans" and "Falluja" clearly paint the brutal social and political pictures. The imagery in both tunes is blunt and unforgettable. This remains true even while his voice and gifted guitar work rise in perfect sync to the ups and downs of the story he's putting forth. Really, every song in his extensive catalogue represents everything a good protest song should be. It's no surprise that he's one of the leaders of the genre. His music retains that essential contradiction of being timeless and relevant at the same time, but it also points to the possibility of something even bigger. If anyone can take the art of the protest song to wherever it needs to go next, he's very likely at the top of the list of possible candidates. He's certainly been in this line of work long enough. A veteran act who hasn't changed his point of view or approach too much over the course of his career, it's just a matter of when he can grab everyone else's attention.

Interestingly enough, Rovics also writes and records children's music. It may not be everyone's thing, but I enjoyed it. Like the rest of his work, it's clever, engaging and if nothing else, makes Rovics that much more well-rounded. His line of work could use more artists like him. —GR

David Rovics has been called the musical voice of the progressive movement in the US. Amy Goodman has called him "the musical version of Democracy Now!" Since the mid-90's Rovics has spent most of his time on the road, playing hundreds of shows every year throughout North America, Europe, Latin America, the Middle East and Japan. He and his songs have been featured on national radio programs in the US, Canada, Britain, Ireland, Italy, Sweden, Denmark and elsewhere. He has shared the stage regularly with leading intellectuals (Noam Chomsky, Howard Zinn), activists (Medea Benjamin, Ralph Nader), politicians (Dennis Kucinich, George Galloway), musicians (Billy Bragg, the Indigo Girls), and celebrities (Martin Sheen, Susan Sarandon). He has performed at dozens of massive rallies throughout North America and Europe and at thousands of conferences, college campuses and folk clubs throughout the world. He has loads of MP3's available for free download on his website, DavidRovics.com, along with CDs, links, etc. More importantly, he's really good. He will make you laugh, he will make you cry, and he will make the revolution irresistible.

David Says: "I'm doing my best to be an effective cheerleader for the left. If I can do that well, I will have accomplished my humble goal. To foment resistance in my own small way."

We are proud to present three songs by David Rovics: