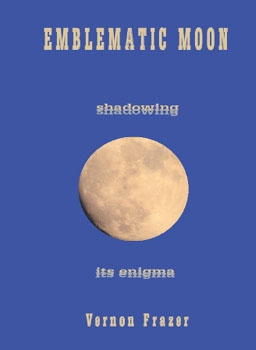 The best thing about Vernon Frazer and his newest book, Emblematic Moon is that at no point does Frazer ever make any guarantees for our safety. He makes no promises as what our state of mind is going to be when the book is finished with us. That's the secret to enjoying a piece of writing as abstract and free-wheeling as Emblematic Moon is from the first ferociously weird page to the last. You have to be willing to leave your comfort zone at the door.

The book isn't just for anyone already capable of appreciating poetry that seeks to create new definitions of expression rather than just working under the ones that are already known. The energy of the entire work is fueled by the vigor Frazer dedicates to creating something truly different in the field of verse. It's that and his optimism towards the potential for putting together something that is more of an experience than just something to be read and filed away in the back of the reader's mind. All of this is designed with the intention of getting people to see what a poem is capable of when the writer is just as interested in form and approach as they are with creating a scene. There's so much more to poetry than just building an image. The way a poem is designed and spread out over the page can contribute something just as meaningful as the words themselves. Frazer knows this and wants you to know it, too.

He's not about to slow down for those unfamiliar with abstract poetry. He has better things to do than wait for you to catch up to the new literary movements that allow Emblematic Moon to exist, move, breathe, and eventually take over everything in sight. You will leave the book with an understanding of what he's talking about. But it's going to be at his pace and not yours. Frazer has made a long, wonderfully strange and never-less-than-interesting career out of destroying an audience's comfort zone and leaving with them with a much greater understanding of just how far-reaching a creative act can be. He's done this through music and spoken word (brilliant albums like Slam!, Sex Queen of The Berlin Turnpike and the incredible Songs of Baobab). He's also accomplished this with numerous works of poetry and fiction (in particular, check out Stay Tuned to This Channel and Relic's Reunions). He's even made some pretty startling, remarkable contributions through his artwork.

At the beginning of Emblematic Moon, Vernon checks to make sure you're safely strapped in for what's coming. He also checks to see that you're still in one piece when it's all over. Beyond that, his concentration is almost viciously pointed at telling a story, and telling it without even a moment of compromise or hesitation. It's the only sound way to approach the art of creating ingenious new territory. The book presents the poem as a single epic piece, the kind of universe that must be absorbed in as few reads as possible. At times, it reads more like a design for a sprawling metropolis. It's not difficult to envision Frazer as an architect who can only express himself through words that on the surface have absolutely nothing to do with what he's trying to say.

That's one of the tricks to understanding Emblematic Moon. That is, if you're looking for Frazer's own interpretation of the poem. If so, then it might not hurt to leave what you think you know about poetry at the door. Abstract poetry can be an overwhelming concept to understand. Especially when you consider that no two abstract poems are anything alike, even when it's the same writer. It's almost a good idea to just pretend you've never read a poem before. Emblematic Moon makes no demands for prior experience as a reader. It just asks for an open mind and a willingness to read between the lines. If you can take seemingly unrelated images, ideas and thoughts and put them together to create a larger meaning, then you'll probably do just fine. The hope that lies within the organized anarchy of Emblematic Moon is that when you're finished you will have constructed an idea of a poem that says much more than what's actually on the page. A task like that can be daunting. It's generally the writer who compromises to suit the reader. Here, it's you who has to surrender yourself to the belief that anything can and likely will happen throughout the book. Again, that can be a little intimidating, but it's well worth the effort. This poem has so much to offer anyone who has a little sense of adventure in what they like to read.

This is only the surface of Emblematic Moon. It stands to get much more complicated if you want to go beyond Frazer's word-for-word idea of what he wants the book to mean. That same sense of adventure isn't limited only to what you might get out of trying for a direct understanding. There's also what you think the book really means. The scene your own mind creates as you move through the troubled, unreliable and surreal landscape of the poem is just as important to enjoying the book as the one Vernon might have thought of when putting it all together. This is where the work really shines and takes its place as one of the best abstract works to come along in quite some time. A good abstract poem isn't just a singular concept that the writer is envisioning. Such a concept might exist in the writer's mind, but the truly memorable pieces are capable of going beyond that. A poet who knows what he's doing creates a work like Emblematic Moon to not just relate a story or take you into their mind. They're also celebrating the very idea of a creative work that offers a virtually limitless assortment of possibilities for interpretation and understanding. That's what this book accomplishes brilliantly. It nails this necessity with a wisdom and talent worthy of one the most compelling writers working today.

Once you get into that territory and realize just how much room there is to draw your own conclusions, things really start to get interesting. I can recall my own experiences in reading through the different highways of thought that stood before me as I got further and further into Frazer's eccentric vision of the world. I could never completely disregard the idea of Emblematic Moon being a city of some kind, something akin to the weird sights and sounds of a film like Blade Runner. It's a city of a thousand different voices, all of them trying to make the same point as you fly past them as though moving through a dream. The voices and faces vary wildly. Every social class and age is represented. All eccentricities and rationales are accounted for. Everyone puts in a word, and everyone wants your undivided attention. Of course, it doesn't work out that way. There's only but so much time to hear everyone's two cents. Thankfully, they're all pointing towards the same idea. All of them have something to say about the world they inhabit. Every last one of them hopes you leave with the idea that there is so much going on out there when you just try to pay attention. It's tricky. The world moves like a series of movies being played all at once and much too fast, but it's still possible to take in more sights and sounds than you think you're capable of. That's the promise I took away from the book at the first glance. It's what the book stood to show me if I let my guard down.

That's just one approach. Another takes a similar thought and keeps the action in a city of madness and entirely too many lights, but takes the people out of the equation. They're instead replaced by ghosts, in and around the lights and sounds of the city itself. It's the idea that everything that shouldn't speak suddenly is speaking and trying to make up for lost time in the bargain. In the end, they're trying for the same point as the people who appear in the previous interpretation. They just happen to go about it in an entirely different way. At times, it's difficult to tell what exactly is speaking as the book moved me from one end of the city to the other. There's occasionally just too much in the way of noise and activity to figure out exactly what's trying to break through it all and be heard. Even so, it's never anything less than stunning, beautiful and effortlessly fascinating writing.

Many other experiences came out of the book besides those two. My point in relating themis to prove just how far the book can take you if you let it. The impressions the book left on me were my own. You may find something similar when you read through it, or you may get something completely different. However you go about it, whatever you want, Emblematic Moon stands to offer it to you. The only infuriating thing about it all is how easy Vernon Frazer makes the whole production look. As far as someone capable of bringing you into a world like this goes, there's really no one better.