Homer Simpson: I wonder why stories of humiliation and degradation make you more popular.
Moe Szyslak: I dunno. They just do.
—The Simpsons: "Dancin' Homer" (Season Two/Episode Five) 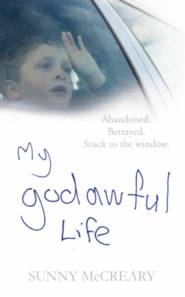 I really hope the U.S. never gets the kind of material satirist Michael Kelly brutalizes in My Godawful Life. Rather, I hope we don't see it on a level that the U.K. is currently experiencing. There are enough misery-loves-company literature and child abuse memoirs written with the closest fetishist in mind already. We don't need an entire section of our local bookstore dedicated to these things. Misery has more than enough company as it is. The idea of an almost cult-like allegiance to whoever can tell the most depressing story is frightening when it's applied to the mainstream. It's even more frightening when you learn that it's already happening in the United Kingdom.

If the British Invasion has taught us anything so far, it's that the U.S. will undoubtedly experience this phenomena sooner than later. So, it's good that we have access to Kelly's story. Told from the perspective of the eternally downtrodden (and male) protagonist Sunny McCreary, the book goes about its point with blunt, deadpan honesty. This is a straightforward, fictional tell-all looking to go straight to the top. It wants to take its rightful place as the bleakest, cruelest memoir ever committed to the business of the sad stories we seem to love so much. Kelly certainly doesn't hide his aspirations. He does a pretty good job of jamming the book's tone and pace straight into our chest right at the first paragraph. Years of experience and success in satire have prepared him for this book quite well. Like any good writer who can skillfully set fire to popular culture and daily life, Kelly knows how to create the perfect universe. He understands what needs to be in place for his tortured, ridiculous characters to exist comfortably (in a manner of speaking). The line between something that can suit his decadently brutal, over-the-top chronicle and our own world is established by the time we make it to second page.

Setting the tone right away is smart work on his part. Kelly doesn't waste a whole lot of time in prepping us for Sunny's hopeless existence. If you're not in on the joke by page one then you probably won't get it at all. If you do leave, it's too bad. Once you're gone, the story really goes into some uncomfortable, relentlessly hilarious territory. This is a childhood that opens with Sunny living in pigeon coops with pigeons who go out their way to make his life even more of an ordeal. It then breezes quite causally into having nails driven into his body by his stepfather. There's even space for Sunny to describe working the arms of his paralyzed prostitute mother during her service hours.

The only problem with setting the bar of disturbing imagery and circumstances so high is the early doubt that Kelly can continuously top Sunny's last horrifying story. Not only top each living-nightmare but still leave some room to tell an actual story while making any and all points on modern life Kelly wishes to make. If his ambition was to just tell a joke and then repeat it for a few hundred pages, he would probably do just fine. Kelly is definitely after more than just seeing how far he can stretch a single punch line. There really is a story and some honest-to-God character growth behind his often brilliant sense of humor. If this were actually a real-life memoir it would be a perfect example of the medium. All of the elements that make for a great autobiography are in place here. This includes pacing, attention to detail and the voice we stand to hear in the narrative. It's a testament to Kelly's talent as a writer that he can assume this literary form so flawlessly in order to pull this book off. In fact, the way he approaches the form and tone of a book like this may well be the only part of the book that isn't some kind of vicious satire. That's why My Godawful Life works so well. The best satire is often the art of detailing ridiculous conditions with a straight face. It's a shame that the book has been out for almost a year—something as wonderfully contradictory as this, absurd and deadly serious at the same time, deserves to do a lot better in the mainstream fiction market.

Even without an epidemic level of misery-fandom to contend with, readers outside of England should still be able to get what's on Kelly's mind. The story of Sunny is still broad enough that all of us can find a common ground. Even as the book sends us hurtling into various horror stories, we never forget what Kelly is mocking. Horror stories like Sunny's experiences as an underage hooker, his career in rhino-themed pornography, his time as a child soldier, his unending cycle of addiction (helium, necrophilia and a dull-by-comparison bout of alcoholism), the death of his dog, the cannibalization of his best friend and several more. Sunny leads us through his life with dry wit and dull resignation to his fate. It's quite often the tone Sunny seems to take in his storytelling that provides the most laughs. Any good comedian will tell you that delivery is a must to making a good joke a great one. By the end of the book it's hard to imagine any other manner of speaking doing so well with a story like this.

The most remarkable thing about Sunny though is the way he manages to retain sympathy throughout. A book that runs a little over three hundred pages is going to have a tough time surviving its length if the main character is unable to capture even a little of our understanding. Sunny brings a lot of the suffering in his life upon himself. This much is obvious. He is a passive victim who rarely makes an effort to step aside when very clear-cut disaster is rolling his way. He often takes this flaw to extreme measures. Even so, it remains something most of us can relate to on some insane level. We can all confess to courting despair in our lives at certain points, if only to have something to keep us busy. Sunny might be turning this common human failing into an Olympic event, but the idea itself is not so far out there as to be completely foreign to us. This probably amuses Kelly to no end. It might even prove his point about our habit of taking our own suffering and using it to relate to a story that's even worse than what our imaginations conjure up for our own lives.

Still, it's not all Sunny's fault. Sometimes, it really is just the worst luck imaginable that's kicking his ass. God never makes a direct appearance in My Godawful Life. There still remains a very real possibility that he has taken an interest in seeing just how much the human spirit can endure through the relentless torture of one human being. It's not impossible to relate to this. While no one will ever go through the hell that Sunny goes through, most of us can still remember times in our lives when it seemed like the universe was Michael Madsen in Reservoir Dogs and we're the cop who's about to be set on fire.

Sunny has that feeling on a truly disturbing level, but we can emphasize nonetheless. No one experiences persecution close to Sunny's, but we're still overdramatic enough in our own minds to feel like life sometimes really is as bad as the events in My Godawful Life. As extreme as Sunny's life is, some of his reactions and attitudes are perfectly normal. Most of them aren't, but the ones that are typical are the ones we can relate to. It's a small part of enjoying the book and some may not understand the idea of connecting to something this comical on any level, but the possibility to do so remains.

The fact that we can emphasize at all would probably amuse Sunny's adopted daughter in addition to Kelly. A twelve-year-old autistic girl with Tourette's syndrome and a prior career in child pornography, Euphemia McCreary doesn't show up in the story until well past the halfway point. She still manages to steal virtually every page she's on. The three chapters of her presently-unfinished autobiography are presented to us at the end of the book and serve as a wonderful way to wrap things up. Euphemia is a perfect counter to Sunny's hopeless victim mindset, and it's almost a shame she doesn't show up sooner.

My Godawful Life may push that clichéd envelope of disturbing humor, but it's never at the expense of what really matters in this book. There's a great, engaging story in between all this madness. There's also a strong, oddly likable central character supported by a multitude of bizarre, often troubling supporting personalities. Most importantly, there's Michael Kelly's striking, wickedly clever commentary on just how far we're willing to go in the name of entertainment and feeling better about our own dull, potentially failed lives. Kelly takes aim at a number of subjects and perspectives, but that's the one he keeps coming back to. It's the one that gives the book weight to be more than just a sick, hilarious read. As pure comedy, My Godawful Life is one of the best things to come out in quite some time. As a social critique, it's even better. But it's in the way both of those philosophies come together that makes this work so well. They meet each other halfway and compliment each other's strengths beautifully. The result is something Kelly should be quite proud of.