Night belly-flop wrestling as if
day had never been, put on the
twitch-lights and the drums, eat
less, hungerless performing with
the Buddha face still beyond calm,
call it frozen downkey ecstaticness,
flowless, flawless, spark and
wireless.

I don't know, young women all over
the place with baby carriages, oldsters
both male and female, out on the
rural roads running, running, running,
I saw two Afros today without any
shirts on, walking to and from who
knows, old guys sitting on their
little village front or side porches,
the dogs out, the hens in the country,
how come they always stay close to
the house, no fences needed, and
the byte-people all over the place at
sundown, those heels and black nyloned
legs, even I want to go out in the
backyard and find a chair and eat
some chocolate-coated raisins and
have a little rootbeer, every face,
pair of eyes, leg, neck, hair divine,
as if IN THE BEGINNING WAS THE WORD,
AND THE WORD WAS GOD AND THE WORD
WAS WITH GOD, AND GOD SAID "NOW!"

"OK, so I'm Ms. Details, have to defecate
three times a day, once when I get up,
then once before lunch, again after lunch,
always carefully check the stools. No blood.
100 % OK. And I eat three oatmeal raisin
cookies for breakfast every morning, with
my 2 vitamin C's, chewables, 500 miligrams
each, one multivitamin, and a baby aspirin
to guard against blood-clotting, I take
five minutes on my stationary bike in the
living room three times a day, at 10 AM,
7 PM and 9 PM. If I go to concerts, I
always try to get back home by nine so
I can watch BBC News while I'm bicycling.
I'm fascinated by Darfur and Mozambique,
Slovakia....at exactly midnight (after half
an hour watching films like Nancherrow,
The Country Diary of an Edwardian Lady,
Lady Jane), take Lunestas on Monday,
Thursday and Sunday, Xanax on Tuesdays,
Wednesdays and Fridays, on Saturday night
I take a combo of Passion Flower, Melatonin
and other herbs...that covers it, doesn't it?
No more high heels. Flats, flat boots, sweaters
between October first and May first,
always sixty degrees in the bedroom,
summer and winter. I go to services at
the United Methodist Church at eleven
o'clock on Sundays, have tea with my
old friend, Annie Grunwald on Wednesdays
at five....well, you get the idea...order equals
sanity. All this nonsense about smiling,
what I'm mainly interested in is beating
the odds...and the next Whatever? That's
where my control ends. Although I do
sometimes take cemetery walks through
the DeWitt cemetery, the most beautiful
hills you've ever seen, hellos (and goodbyes)
to the known, unknown, and who knows,
yet to be known....." 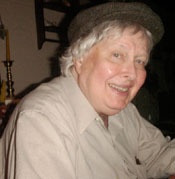 Hugh died on Sunday, September 4th, 2011 in a hospice in Michigan. He was a great contributor to the small press; Unlikely misses him.