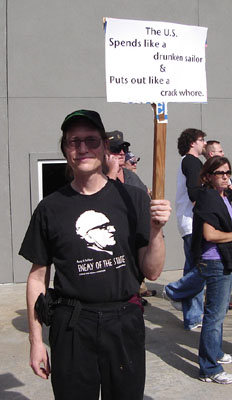 As listeners, we tend to take folk musicians like Hogeye Bill for granted. You could probably throw a rock in any direction and hit any one of a thousand different such personalities from a thousand different walks of life. All of them claiming to be folk singers, steeped in the path created by icons like Utah Phillips and Bob Dylan. However, striking one who actually has something meaningful to say might prove problematic. The reason why we take this music for granted is because an unfortunately large portion of them just aren't very good. Too many are dedicated to following in their heroes' footsteps to the point of being a bland carbon-copy and nothing more. Either that or they're too busy howling whatever point they're trying to make to realize that their point still needs to come across as a strong piece of music.

Hogeye Bill is one of the exceptions. Thank God he is, because folk music remains a very clear forum for storytelling with a point and humor with a warning. Bill certainly has his music heroes and influences. Several (but far from all) of the songs listed on his website are either Dylan covers or songs Dylan himself covered on his 1993 album World Gone Wrong. However, he doesn't live in the same house as the artists who have inspired the bluntly humorous, engaging "Freethinker's Song." He visits them, draws on their influences, but keeps his own music very much in his own style and train of thought.

That's as true for "Freethinker's Song" as it is for "Cry Crisis," the video of which you can find below. Of course, in true folk tradition, the video is nothing fancy. It's just Bill sitting in front of a camera. "Don't tread on me" hangs menacingly in the background as Bill puts his passions and obsessions into the better of the two songs available on his site. His opinion is clear and relentless, but he manages what so few folk artists seem to be capable of. He possesses the ability to throw down a very decisive view while keeping the music steady, right under the point. All the while, the song never loses sight of the necessity to craft compelling, black comedy lyrics. 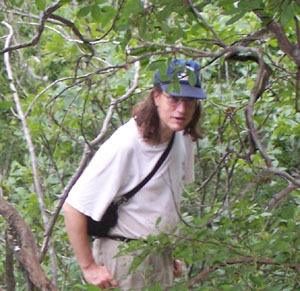 Hogeye Bill obviously seems to hold writing in high regard. In addition to his songwriting, he has also found the time to publish numerous articles on everything from book reviews to currency and the fascinating prospect of trying to create a form of currency unique to his community in Ozark Hills, Arkansas. The articles are sharp, crisp rants on the issues most troubling to Bill. They point to a man who has is firmly entrenched in his convictions. However, not so much that he loses sight of how important it is to put those convictions to some well-written words. Hogeye Bill has struck the perfect balance. His heroes would be proud of him. —GR

Hogeye Bill Says: I'm Hogeye Bill from the Ozark hills of Arkansas. Besides songwriting, I play chess a lot and write some, usually about political subjects from an anarcho-capitalist perspective. My main musical influences are Blind Willie McTell and Bob Dylan. Subject-wise, I do a lot of reefer songs and political songs. My music page is at http://www.ozarkia.net/bill//music/HogeyeBill.html. My most requested original is "Every Dead Narc is One Small Step for Freedom."

And the video for "Cry Crisis:"

The video for "Cry Crisis" is in the new .mp4 format. If you have difficulty playing it, try installing QuickTime.