Chomsky is also a founder of the North Shore Colombia Solidarity Committee, which has been working since 2002 with Colombian labor and popular movements, especially those affected by the foreign-owned mining sector. She just returned from the Witness for Peace delegation (May 28 - June 6) that traveled to two regions devastated by coal mining: the state of Kentucky and to northern Colombia. The Kentucky segment was sponsored by Kentuckians For The Commonwealth (KFTC), where participants witnessed the impact of Mountain Top Removal mining and Valley Fills on local communities. In Colombia the delegation met with human rights activists, trade unionists, members of Afro-Colombian and indigenous communities, and others affected by coal production in Colombia.

Hans Bennett: Having just returned from the Witness for Peace delegation's trip to Kentucky and Colombia, can you please tell us about your visit to Kentucky, and about the group 'Kentuckians For The Commonwealth' (KFTC)? 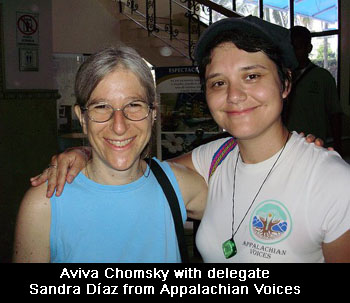 Aviva Chomsky: KFTC is a community organization working on social justice issues, one of them being local resistance to the mountaintop removal coal mining that is destroying lands and communities in Appalachia. I've been working with them since last summer, when four people from that organization came with us on our delegation to the Colombian coal region. The connections they made between the two regions were amazing. In both, big companies run roughshod over some of the poorest and most marginalized people. People are losing their land, their water, their right to clean air, and their homes to the coal mines. The Kentuckians felt a real link with the Colombian communities, that they were part of the same struggle. Last fall, we worked with KFTC to organize a tour for two Colombian coal union leaders. They spent a week in Kentucky, seeing for themselves the results of mountaintop removal, and speaking to different audiences there. The Colombians were also incredibly moved by the destruction of land and lives in Kentucky. They couldn't believe that this was happening in the First World. We decided we'd really like to organize a delegation that would visit both regions—and that's what we did this summer. We spent three days in the Kentucky coal region, and then went to Colombia. We also had five people from Appalachia, all involved in different aspects of the movement against mountaintop removal, with us on the Colombian part of the delegation.

HB: What did members of the group share with the delegation?

AC: One thing that really struck me was the ways that people in both the Colombian and the Kentuckian coal regions talked about the land. I'm from the city, and have lived a pretty cosmopolitan life. For people in eastern Kentucky, like those in northern Colombia, the land is tied to the essence of their identity. People have generations-long ties to the land, they farm the land, they feel personally connected to the mountains, to the rivers, to the farms. Also, in both regions, people are aware that they are seen as expendable, not only by the coal companies, but by the centers of power. Both regions suffer from a lack of state services, and have been really politically marginalized. But also in both regions, there is a really powerful sense of collective identity that I think has contributed to the strength of the social struggles there.

In one interview a few years ago, a Colombian indigenous leader explained to us that for his people, the earth was "la madre tierra," mother earth. "It hurts us to see the earth damaged," he said, pointing to the gaping hole of the mine. People in eastern Kentucky talked the same way about their mountains.

HB: What has been the impact of the coal mining industry, Mountain Top Removal mining and Valley Fills on the local communities?

AC: The impact has been devastating. I've never been anywhere else in the United States where you can't drink the water! But the tap water smells so sulfurous that I was even wondering if it was safe to shower in. People in the region complain of the same kinds of illnesses and reactions that we've seen in Colombia—respiratory ailments, rashes and skin diseases, eye diseases—reactions to coal particles in the air and in the water. Rivers that used to run crystal clear have turned into toxic sludge. People's homes are being surrounded by the various impacts. A mountainous region is being flattened. A way of life and a people are being forced into extinction.

After visiting Kentucky, the Colombian union leaders told us they were shocked by how "irrational" the mining was there. I didn't really understand what they meant until I saw it myself. In Colombia, there are huge seven-foot seams of coal. The mines there are giant operations that have opened up many-mile long areas. In Kentucky, whole mountains are being felled for little seams that are only a few inches wide! And believe it or not, there seem to be more serious reclamation efforts going on in Colombia than in Kentucky.

HB: After visiting Kentucky, the delegation flew to Colombia, which your flyer explains is "the largest recipient of U.S. military aid in the hemisphere, and also the country with the highest levels of official and paramilitary violence, including forced displacement, killings of journalists, trade unionists, and human rights activists." The flyer asserts that "foreign corporations are some of the major beneficiaries of this situation." How do the corporations benefit from this? How does US financial and diplomatic support for the Colombian government influence the situation?

AC: Colombia is the poster child for neoliberalism in Latin America. Since the 1970s the United States—and the international financial institutions that it plays a leading role in, like the World Bank and the International Monetary Fund—have been pushing a development model on Latin America that calls, essentially, for governments to act in the interests of multinational capital. Governments are supposed to invite in foreign investment, and provide it with low taxes, low wages, and low regulation. They are supposed to cut back on social spending, and offer state enterprises up to the private sector. And, they're supposed to quash any popular protest against these policies, using force if necessary. These policies have gone by names such as structural adjustment, the Washington Consensus, the "Chicago Boys" prescriptions [referring to the role of Milton Friedman and other economists from the University of Chicago], or neoliberalism. The United States has played a key role in the implementation of these policies—from working for the overthrow of elected socialist president Salvador Allende in Chile in 1973, and their implementation there, to Plan Colombia today, by which the United States provides military and economic aid that goes directly to implementing this economic model and crushing protest.

Union leaders have been some of the most visible victims. In the U.S.-owned Drummond mine in northern Colombia, three union leaders were assassinated in 2001. The company is currently facing a lawsuit in the United States for allegedly paying a paramilitary force to carry out the murders. Another U.S. company, Chiquita Brands, admitted to making payments for years to the paramilitaries. They claimed that they made the payments to protect their workers, but banana workers—and especially union activists—were the main victims among the hundreds murdered by paramilitaries during the 1990s and early 2000s.

HB: Before we talk about the delegation's visit to Colombia this month, I'd like to first refer back to our 2007 interview in Z Magazine titled "Colombia Solidarity Work", and ask you to please give an update about what has been going on since then, during this two year period since then.

AC: When we visited the Cerrejón mine in the summer and late fall of 2006, the company had taken the stance that it would not recognize or negotiate with the displaced Afro-Colombian community of Tabaco. It also insisted that community issues and union issues be kept completely separate. The union had included a demand about the rights of the communities in its 2006 bargaining proposal, and the company absolutely refused to include this in the contract—although they did agree to a side letter inviting the union to participate in the company's social programs.

In the summer of 2007, Cerrejón announced that it was forming a Social Review Panel to evaluate its relations with the communities and provide recommendations. The Panel concluded that the displacement of Tabaco was a festering wound, and that the company simply had to rectify this if it wanted to develop any kind of working relationship with the local communities. The company agreed, finally, to engage in collective negotiations with former Tabaco residents, aimed at a resettlement of the community. This was a struggle that had been going on for ten years! In December of 2008, the company signed an agreement with the community defining the terms of the relocation and for compensation for the people who had been displaced. This was a huge victory.

Still, in some ways we were struck with how much has not changed. Although the agreement was signed with Tabaco, the relocation process has not yet begun—so people are still displaced. In the other communities we work with, the company has been engaging in collective negotiations for relocation—but they are still desperately poor, landless, and living in the shadows of the world's largest open-pit coal mine.

In the Cesar Department, where the U.S.-owned Drummond mine operates, things are even worse. Union leaders there live in daily fear for their safety and lives. We had hoped to return to one community that we visited last summer, Mechoacán—but it had been wiped off the map. We met with the communities of Boquerón, El Hatillo, and Plan Bonito, that are slowly being strangled by the mine. Drummond, unlike Cerrejón, still refuses to recognize any right to collective relocation for these communities, and is simply trying to starve people out in hopes that they will leave.