house has on a yield sign
going downhill backwards your lane

there over the corner

still the bright blue corner house has a yield sign 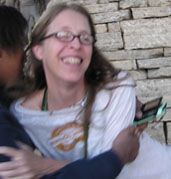 Khadija Anderson, Poet and Butoh dancer, returned last year to her native Los Angeles after eighteen years exile in Seattle. Khadija's poetry has been published in print in The Ursa Major Poets Anthology, The Ticket, and The Ark Magazine, and online in Unfettered Verse, Washington Poets Association's online whispers & [Shouts], CommonLine Project, Here & Now, Gazoobitales and Qarrtsiluni. She has been a featured reader numerous times in Seattle, and now lives in Altadena with people she loves and the mountains to gaze at. Qarrtsiluni nominated her for a Pushcart Prize.

nice work there. I especially like Commute the Corner. It's got a lot of life to it. Thanks.