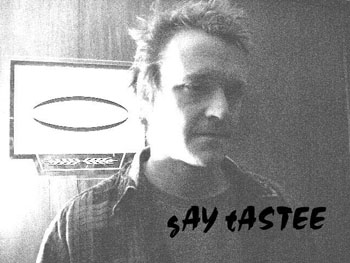 Steve Gaylord, better known as Gay Tastee, is a regional folk singer songwriter out of Albany, New York. His songs are steeped in historical references, classic Russian novels, the walls of vandalized churches, and misanthropes drunk on Robitussin. His voice, while unconventional, intonates the sad desperation of the hopeless everyman. Check out his song "jihad-vs-mcworld," in which Steve would "rather die in a martyr brigade... than to be that putrid plastic smile /stapled on at the end of every shitty day /when the world's done kicking your ass."

All of Steve's albums, which include the diverse bands Beef, the Wasted, Gay Tastee, and his newest project, St. Jude Pray for Us, explore the ill effects of tyranny, big religion, drug use, pop culture, and day jobs. He also manages to work in painfully personal lyrics whose introspection give credence to his fantastic storytelling capability. A personal favorite is the song "mountain music." "Daddy settled up the bad days with whiskey and his fists/ and he cracked that bottle open and cranked the mountain music loud/ and I lay on my bed and close my eyes and pray to god/ sometimes I got lucky and he passed out/ and momma came home from that second shift." 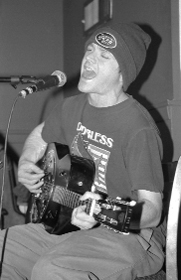 The Gay Tastee albums range in recording technique. Some tracks are high-end studio, others are low-fi five-track basement stuff. Take some time to let it grow on you so that you can appreciate the full beauty and diversity of Steve's craftsmanship.

You can visit Steve at www.gaytastee.com and download the entire album, "Gay Tastee Hates You," as well as live tracks from radio broadcast and a buddy's apartment. You can also visit his rock band, the Wasted, at www.upstatewasted.com. —ES

"Weak and Nervous," "Mountain Music" and "Napoleon" are .m4a files, and might not play with a regular .mp3 player. We recommend that you install QuickTime to hear Gay Tastee's music. "Dollar Tree" should play on most recent computers without additional software.