Going into his new novel, The Tatterdemalion, award-winning poet Ray Succre had to have known that madness was some of the most familiar territory in all of creative work. Moreso when it deals with a writer and the desperation they face trying to create that great and definitive piece of writing amidst a world determined to fall apart whether they're ready for it or not. But if Succre was at all concerned, he certainly doesn't show it in even a single line of the book's three-hundred-and-fifteen pages. There's not a moment of hesitation in his story of a thirty-something writer struggling to make sense of his own crumbling mind against a backdrop of constant failure in his dream of being at least a competently functioning member of society. 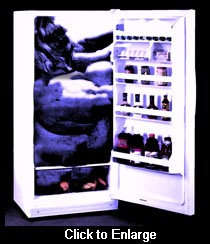 A strange confidence comes through the pages, starting right with the frantic opening which thrusts us right into the heart of the narrator's wretched life and disintegrating sanity. Succre knows exactly what kind of story he wants to tell. He knows we're smart enough to figure out right from the beginning that the world the narrator inhabits is pretty dammed far past the point of being only a little off. The so-called "dragons" that inhabit his life, starting with The Red Dragon in the first chapter is only the start of the waking distortion that has become his day-to-day life. Walking, talking metaphors have invaded the narrator's fragile world and taken up the task of controlling not only his surroundings but also the direction his life is taking. One takes up residency in his oven, turning the apartment into a brutally hot steam room and forcing the narrator to join him inside the oven to dictate poetry that will be sent to the major literary magazines for consideration. Another comes to appear to him in his refrigerator, turning the apartment into a winter wonderland with all the cold and none of the scenic charm as she too puts him to work writing poetry but on a less grandiose scale than that of The Red Dragon. And the third possessing only a marginal interest in writing poetry or being published, but instead containing a sadistic steak of ambition that can hardly be confined to any one place. All of them relate to something critical in the narrator's life and all of them hold the one thing over him that our hero comes to prize as the means and end to everything he had been through and everything his world will ever hope to mean. 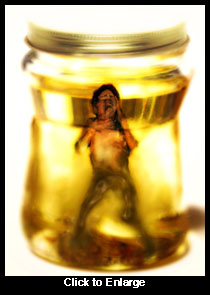 Succre's near-flawless attention to detail and voice through the thoughts and words of his main character establishes early on that this object, known only as "the jar" is the one and only goal in his life that is keeping him whole. It's one hell of a mystery to open with and hold above our heads to keep us moving from page to increasingly bizarre page. It's the potential Pandora's box miming as The Fountain of Youth. The distant and glorious object that haunted every step taken by Stephen King's protagonist in the epic Dark Tower saga. The missing piece that shattered Dwayne Hoover's puzzle in Kurt Vonnegut's Breakfast of Champions. It's a testament to Succre's excellent mix of prose and old-school fiction that we believe without question how critical this jar is to the narrator right at the start. His attention to details moving effortlessly with his skill for keeping the plot rolling at a perfect pace is the mark of a writer who is well worth paying attention to.

Another thing that helps is the character himself. As he moves through his routine, he is at all times both believable and accessible. Someone you're likely to identify with and get behind by the time the second chapter rolls around. Succre's ability to casually handle the depth of a man falling apart with both unflinching brutality and carefully-chosen moments of wickedly funny dark comedy is evident in every aspect of his character's everyday dealings. Putting up with whatever dragon happens to be forcing itself upon his life. Going from odd job to increasingly odd job. Holding rare moments of clarity in the presence of his wise, compassionate and ancient father. Not to mention juggling all of that during fits of a three-step obsessive-compulsive assault that can trigger at any possible moment, causing spasm in his arms, a one-man staring contest that's at best disconcerting to whoever's on the receiving end and then finally capped off with a vocal tic that renders him unable to say anything but the pitifully obvious in any conversation he has until the attack as run its course.

It's the vocal tics in particular that provide some of the book's best laugh-out-loud moments. If I had to chose a favorite of my own, it would unquestionably be his declaration that "Menus show you what to order!" to a mob that has formed around his physically- and emotionally-battered apartment building in the wake of his accidental killing of the local zoo's panda bear, resident symbol in the city of Boston of all things pure and good. It's a good example of the dark humor that punctures many of the book's bleakest moments. It's also another noticeable indication of Succre's particularly fearless brand of storytelling. You have to wonder at a writer's sense of humor when he's able to pull honest-to-god moments of laughter from so much suffering. In other words, you know you're in for a strange ride when a character can manage to interrupt moments that would have broken a lesser man ages ago with serious concerns over whether or not he's too racist or making sure he limits his nicotine intake to just one cigarette a day. Or when his borderline deranged addiction to taking on a series of temp jobs so over-the-top in their absurdity that his spectacular failure in each and every one of them is both heartbreaking and starkly hilarious.

But the thing to remember is that it never goes overboard. Restraint seems to be another one of Succre's talents. The often hard-won ability to deftly balance everything necessary to tell a story that is complete and relentless in its ability to encompass a concrete wilderness of tragedy, gallows humor and a critically important supporting cast. The Black Flower, the woman who works at the unemployment office our hero frequents and source of his racial fears is particularly intriguing and well established by Succre. The narrator's father is also worth mentioning. A former literary magazine editor, he represents some our vicious circle prone hero's only moments of emotional stability. Succre doesn't beat it into our heads that his protagonist loves his father deeply and vice-versa. He reveals it in their conversations, in the honest, contrasting emotions that run through him as he describes his father both in his childhood and in the present. Through everything else the book takes us through, he somehow works in a secondary character that's more than just a simple plot device.

The same can also be said for the last of the significant supporting characters to play a critical role in Succre's excellent development of his main player. In the form of a legendary action movie star who represents the final part of our narrator's splintered psyche, Succre introduces a surprising ally who quickly becomes as important to our narrator as The Black Flower or his father. Much like the dragons, these characters are the living metaphors that must be faced in some form or fashion if our guy is going to get out of his waking nightmare alive.

The phrase "page-turner" is one of the most overused clichés a reviewer could ever hope to use. But I'm going to take a chance anyway and go with it as the best possible way to describe just how wonderfully absorbing this gem of a novel happens to be. Three hundred and fifteen pages is already somewhere in the neighborhood of a fairly easy read length-wise. Add in Succre's remarkable tale of the lengths one will go to for even the promise of light at the end of the claustrophobic tunnel, and you're left with a book that shouldn't surprise you in the least when you realize that you've finished the thing in just a handful of days. Leading up to one of the most startling and well-crafted conclusions ever committed to a journey this terrifying. It's just that engaging.

And again, it needs to be said that any writer with serious aspirations on creating a totally original idea devoid of any past influence should probably be more prepared for the inevitable brick wall that's going to crash into their dreams at about a thousand miles per hour. Because the thing to remember is that knowing this doesn't mean it's pointless to get into the game at all. The psychologically black-and-blue protagonist of Tatterdemalion seems to know this without actually knowing it. And it's a philosophy shared with the book's author. The potential to do something distinctive and significant with something as old-hat as insanity is alive and well. And it breathes an unmistakable fury in Succre's crowning achievement (so far) as a writer brilliantly capable of looking towards the absolute edge of how far a man will go to come back from the darkness that threatens to swallow him whole and leave him alive just long enough to feel every agonizing moment.

We should count ourselves lucky that he's willing to report his findings to us in such clear, unflinching form.