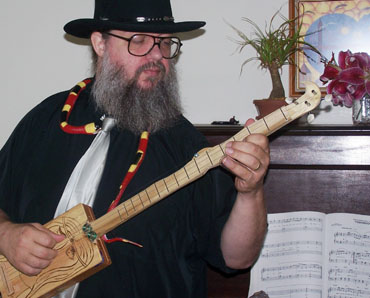 Allow me to introduce you to Cyclops, Autumn Leaves, Weeping Goddess, and the Goblin. And oh yeah, the artist behind the duct tape and pluck, Doctor Oakroot. The good Doctor applies time and craftsmanship to his art. He currently uses the vehicle of traditional blues to deliver his stories but has been known to go punk rock and specialize in the international language known as Esperanto. The music is self-described as "rough edged songs on quirky homemade guitars." This description is accurate enough seeing as the man creates his guitars from cigar boxes.

His lyrics are semi-autobiographical, particularly in the case of the title track to his latest album, Shroud for the Dead. In this dirge a man walks in on his wife rolling around the floor with the mailman. I'll assume "rolling around the floor" means they were fucking and not wrestling to pay the cable bill. Everyone knows mailmen don't pay bills. All assuming aside, I know the song is loosely based on actual events of Oakroot's life.

Another tune of an autobiographical nature is "Rushing to the Funeral." Apparently while Oakroot was dillydallying his way across some crosswalk in Cambridge, Massachusetts a rather speedy motorist nearly eradicated the flesh and bone known as Doctor Oakroot.

Should you go to his myspace page at www.myspace.com/doctoroakroot you will be able to purchase his afore mentioned album which has eight groovy tunes plus a bonus track and if you ask nicely he'll probably autograph the durn thing ta' boot. At www.doctoroakroot.com you will find up close interviews with his guitars as well as biography and more fun links. Also know this. During every one of his shows, Oakroot raffles off a free handcrafted guitar. This is fun and I should've won. —ES

The music of Doctor Oakroot remained on Unlikely 2.0 for one year, then was removed for reasons of space and copyright.

The songs of Doctor Oakroot are not available for download, but instead can be heard right here on the web site. If you don't see a jukebox above, try downloading Flash player.

If you ever get a chance to see Doctor Oakroot in person...do it! He is mesmerizing... deep baritone voice and magic on the fretboard... And evening will go by like a minute and leave you wanting more....