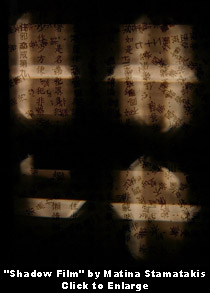 Books of photographs, albeit easier on the eyes and so therefore easier to consume than heady texts, can be hit or miss. When aesthetic matters are based on issues of taste rather than the inherent conceptual merit of the work itself, it can be very difficult for a collection of photographs to rise up beyond the parameters of what one likes or dislikes.

Matina Stamatakis' newly released collection abides by a rigorous yet nested code, a kind of unifying thematic that truly harmonizes the collection as a self-contained totality. It is not merely the images in isolation that delight and give pause for reflection, but the way that these images communicate with one another. These are hardly a Sunday afternoon hobbyist photographer's project, but rather betray Stamatakis' deeply sensual preoccupation with textured landscapes. There is, in nearly every one of the images, a fidelity to the use of text to provide these textures, streaming and coalescing everything from Chinese pictographic marks to gangland tagging. It is not just the marks that provide for the viewer vivid texture, but the surfaces upon which these marks are made. In the opening series in this volume, "Graffiti Papyri", there are noticeable Dadaist inflections as clots of text are overlaying each other upon seemingly found materials that are battered in way reminiscent of ancient papyri found in Jordan. In "Beauty in Chaos" and "Tracer", Stamatakis projects Chinese text upon apparent nocturnal backdrops replete with neon blurs. The dilapidation of her chosen materials is certainly bringing the "gutter to the shutter." 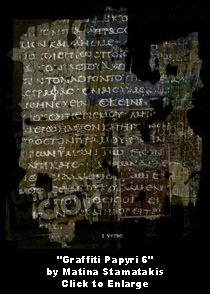 Perhaps the crowning pieces in this volume would be the stark diptych, "Origami Asylum 1" and "Origami Asylum 2" which, apart from demonstrating Stamatakis' highly capable eye, appears to pay homage to the theoretical insights of Michel Foucault. The Origami asylums with their intricate folds bespeaks of a complex clinical image that is both Baroque and menacing in its grainy black and white presentation.

To follow the "orientalizing" line of Stamatakis' work is to miss out on the more intriguing critical response her mixed media is making on postmodern photography. Her occasional focus on decontextualized minutiae recalls Mark Kessel's daguerrotypes, but are executed with a sensibility for vibrant colour combinations that seem to pulse in the image. The use of collage is generally on the order of attentive minimalism at times, always second to the texture created by the concatenation of items. Stamatakis' subjects, be them isolated sections of flowers or manipulated light bulbs, do not overwhelm the viewer's attention, but are rather cast in a sort of eerie yet eloquent silence. 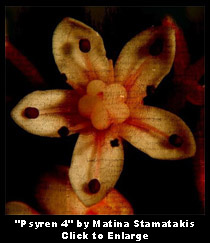 Other highlights in this chic and svelte volume include "Lily Codes with Ted Warnell": a stark and postmodern nod to medieval herbaria filtered through a satirical mathesis universalis, arrayed in the muffled and sterile quality of a museum exhibit under minimal light. The liquescent nature of "Lumen" and "a)b)c" bring to the fore broad bands in luminary overflow with a complementary austerity in presentation.

If this collection of photographs are but a small sample of Stamatakis' wide-ranging talents with the lens and the darkroom, then we will doubtless be privy to whatever newly intrepid works of vivacity and conceptual puissance this artist will offer up in future.

Kane X. Faucher is a doctoral candidate at the University of Western Ontario's Centre for the Study of Theory & Criticism in London, Canada. He has published in several academic and literary journals both online and in print. He also has published three novels, Urdoxa (2004), Codex Obscura (2005), and Fort & Da (2006). His web page is at http://www.geocities.com/codex1977.