There's actually existing capitalism and there's the ideal of no state intervention at all free market capitalism—two different things. Nevertheless, both capitalists and anti-capitalists are prone to confuse the two. Naomi Klein's book, The Shock Doctrine: The Rise of Disaster Capitalism, is a case in point. Discussing the Iraq occupation, Klein writes, "When Iraqis resisted, they were rounded up and taken to jails where bodies and minds were met with more shocks." Here we have an occupied country, with checkpoints on streetcorners, where all capital goods are destroyed or under control of the occupation army or its puppet government, and Naomi Klein considers this to be "complete free trade!" One can only wonder what controlled trade would be like for her.

Klein's vulgar statism is reflected in her choice of poster-boy for fascist corporatism. There are many possible choices—she discusses actions of Kissinger, Cheney, Rumsfeld, James Baker, Jeffrey Sachs and various World Bank and IMF functionaries—but she chooses a moderately libertarian egghead professor, Milton Friedman, as the quintessential demon of corporatism. Anyone who has read any Milton Friedman, his Capitalism and Freedom or Free to Choose, or his many Newsweek articles, knows that his main theme was free markets, that is, markets without government control. His ideal was relatively free-market Hong Kong, not fascist Chile. Klein tries to demonize Friedman using rather transparent guilt by association. His university had exchange programs with some Latin American universities, so Friedman had a lot of Latin American students. Some students later got government jobs under Pinochet. Friedman once met with Pinochet for 45 minutes. For Klein, this makes the kindly Nobel Prize-winning professor Pinochet's evil mentor and accomplice. There are hundreds of pages with sentences juxtaposing "Chicago Boys" or "Milton Friedman" with phrases like "torture and kill people" or "shock treatment." The fact is: Milton Friedman's capitalism is closer to the laissez faire no-government type than the fascist corporatist type.

Klein makes a big deal out of Milton Friedman's assertion that reforms are best made during crises. This is puzzling, since virtually every reformer/revolutionary, from Tom Paine to Margaret Sanger to Karl Marx, has said the same thing—that you need to strike while the iron is hot. Klein tries to construe the crisis can be opportunity idea as unique to Friedman and evidence of evil intent. It is neither.

Some may find it humorous that Klein considers Milton Friedman to be the quintessential radical capitalist. Among pro-capitalists, he is considered rather mild—a soft libertarian. Some haven't forgiven Friedman for giving us income tax withholding (as a temporary WWII war expedient, of course), which is about as anti-capitalist as a program can be. Milton Friedman's (the Chicago School's) monetary economics is distinctly un-laissez-faire since it endorses government control and regulation of the money supply. If you want radical laissez faire, look to Milton's son David Friedman (The Machinery of Freedom), Murray Rothbard, Walter Block, and other anarcho-capitalists.

The source of Naomi Klein's confusion is her one-dimensional political model. For her, it's socialism versus capitalism. She holds an unstated assumption throughout the book that a strong invasive state is necessary and desirable. In her one-dimensional model, consideration of liberty and authority is omitted. In her view, authority is a done deal; what matters now is only how you use the ring of power—for good (socialism) or evil (capitalism).

Klein's statism permeates the book. She never met a nationalization of property she didn't like. She equates government ownership of resources with people owning the resources. Thinking the state is the people is a sure sign of statism. Klein seems to celebrate any increase in state power, without an inkling that state power can only be extorted from society, from the sweat and blood of the people.

Klein's one-dimensional framing yields a false choice between statist socialism and statist capitalism. Libertarians of both economic schools are "off the radar" in her model. We get a clearer understanding by adding another dimension, a libertarian-authoritarian dimension, to the model. 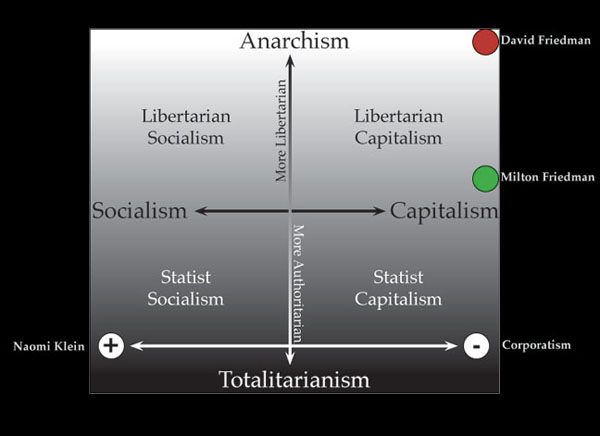 The liberty-blindness resulting from her one-dimensional view explains a lot of things, from her misclassification of Milton Friedman to her inability to distinguish free trade from economic fascism. Klein's left-right model is indicated in the diagram above. If one favors any place on the libertarian side, her statist-biased model leaves you out in the cold.

Two other errors detract from the book. One, her historiography is hackneyed and inadequate. She offers ideologically-reeking propaganda as historical fact. Thus, in her eyes every statist socialist regime in Latin America was on the right track and doing pretty well, and when they had problems, it was not at all remotely due to their policies, but just happened accidently like the weather, or was a nefarious plot of the Chicago boys or their ilk. On the other hand, when something goes wrong economically in a statist capitalist regime, it is clearly the result of mismanagement and proves the abject failure of voluntary markets. Of course, she's half right—the statist capitalists screw things up. But her ideological blinders won't allow her to see that the statist socialist policies also screw things up. Perhaps it takes an anti-statist to perceive the state's fecal touch or to recognize the corruption inherent in the political means.

Klein portrays various Latin American statist socialist regimes as struggles between the capitalist ruling class and benevolent socialist rulers representing the people. She wants these states to forcibly prevent people from buying and selling their produce, cleverly using the obscure sugar-coated "developmentalism" rather than the standard term "protectionism." Her transparent party-line history is generally misleading when not outright wrong.

Readers who want a good explanation of Latin American politico-economics would do much better by reading Liberty for Latin America: How to Undo Five Hundred Years of State Oppression by Alvaro Vargas Llosa. Llosa's view is that it really doesn't matter much whether the rulers call themselves capitalist or socialist, whether they plunder by concessions and taxation through crony firms or straight-out theft from nationalized industries. According to Llosa, the difference between left and right is cosmetic—they are both basically the same ruling Spanish-descended landowning elites. Llosa's five "principles of oppression" are corporatism, state mercantilism, privilege, wealth transfer and political law. In his book, he traces these five pillars through colonialism, the republican revolutions, the people's revolutions, and the capitalist reforms. He sees the solution involving the recognition of property rights for the masses, thereby legalizing the squatters and informal markets. Contrary to Klein's contentions, the ideological professions of the ruling caste are not very relevant to the real problems. The critical factor is basic liberty for the people, not the favorite economic flavor of the rulers' intellectuals.

Other examples of history gone bad in this book are Klein's recap of FDR's administration and the Marshall Plan. FDR is portrayed by Klein as anti-capitalist, yet in fact he enacted Mussolini's corporatism (Industrial Boards) just like the original fascist. One would think that Klein would be leery of the business-government alliance Roosevelt engineered. Mussolini recognized and publicly congratulated FDR for coming around to fascism. As for the Marshall Plan, "the countries that received the most Marshall Plan money grew the slowest ... while those that received the least money grew the most." (Jeffrey Tucker, The Marshall Plan Myth.)

A second weakness in The Shock Doctrine is the total absense of economic theory. There isn't a clue about causation, of what might cause inflation or unemployment. It would be unfair to say that The Shock Doctrine has bad economics—it simply has no economic ideas or knowledge at all. This is what allows Klein to attribute bad things that happen to "good" regimes as accidental, but bad things happening to "bad" regimes as the inevitable result of mistaken policy. Without any theory, she may suppose she can get away with such bald assertions, especially considering how dismally ignorant most Americans are in economics. More knowlegable readers will discern that the hyperinflation may be caused by a printing-press money policy, and that massive social spending has to come from somewhere. If the rulers don't steal it overtly with nationalization and taxation, then they have to do it covertly with fiat money inflation. Politicians and rulers, no matter how popular, cannot magically will wealth into existence. If you understand this, then you already know more economics than 90% of USAmericans.

The Shock Doctrine does have some strong areas. The inside stories behind government secret research and malfeasance are wonderful. I especially liked the information about torture research, where the US government contracted professors at McGill University in Canada to do sensory deprivation, psychotropic drug, and electric shock "research" on students. Also I enjoyed getting the lowdown on various influence peddling schemes, conflicts of interest by government officials, and collusions between crony corporations and states. Naomi Klein, ace journalist, clearly excels at this type of thing. 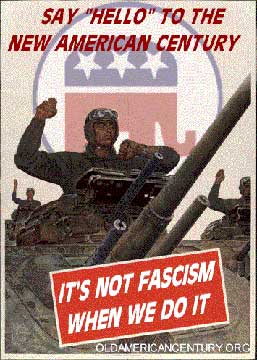 Klein's main theme in the book is the growing malevolence of corporatism—"the merger of political and corporate elites in the name of security, with the state playing the role of chair of the business guild." This main theme is right on the mark. However, her hysterical anti-capitalism causes her to get most of the details wrong. Some of her most far-fetched claims may leave you in stitches. She blames the 9/11 mass murders, not on interventionist US military policy, not on utter failure on the part of the CIA, NSA, FBI and other government intelligence agencies, not on US mass murders or embargoes or military subsidies to foreign powers, not even on the terrorists, but on (hold your breath) Ronald Reagan's firing of striking air-traffic controllers in 1981! With all the government failure, she must have had to work hard to come up with that one. A particularly strange contortion is Klein's claim that statist capitalists are trying to "auction off" and "hollow out" the state. To paraphrase Bakunin, a state's power hurts about the same whether you call the stick you're getting beaten with "an outsourced stick" or "the people's stick." Brownshirts can kill you just as dead as SS agents can. Her suggestion that the Bush-Cheney junto is withering away the state is absurd.

I cannot recommend this book because of the large amount of disinformation and absence of economic aptitude. Parts of the book are good, but if you want to learn about the corporatocracy, Confessions of an Economic Hit Man is a better book. John Perkins, the author, has his biases, but is much better at separating observations from opinion. His fact and experience chapters come first, with his commentary mainly restricted to the last few chapters. In Klein's book, virtually every page is drenched in state-socialist ideological dogma.

It is absolutely true that states collude with special interests for mutual benefit, and that there is a cozy alliance between certain business interests (especially in the munitions and security industries) and the state. It is true that there exist dangerous cartels of states (such as the World Bank, WTO, and IMF) which operate as worldwide fascist "corporations." It is also true that so-called "free trade agreements," despite their names, are actually not free trade agreements at all, but managed trade agreements between conniving state rulers. The mistake Klein makes, in keeping with her authoritarian ideology, is trying to absolve states, the main perpetrators, of any blame, by shoving all blame on secondary beneficiaries of the state's plunder operation. Klein attempts to frame the problem of political aggression soley in terms of economic preference. She does not seen to realize that the root problem is political power. The hapless serfs are screwed whether the rulers own or lease out the people's plundered resources. Solutions need to involve reducing the predatory power of rulers, and recognizing the rights, including property rights, of people. Whether such rights follow a capitalist, mutualist, or socialist model is of secondary importance. So long as rulers sell their people out, it doesn't matter what economic system they claim to follow—the result is the same.