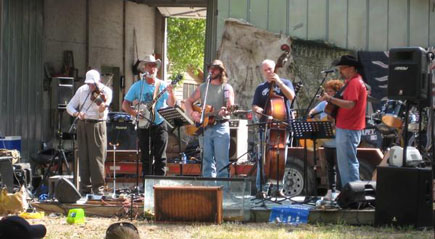 It's like this—I go to the super market around the corner from my house and they are closing early for renovation; the manager lets me in because he either recognizes me or because I have a Black Sabbath T-shirt on—either way I'm in and buying a bottle of their finest wine which happens to be a Mondovi Select Pinot. I know, it doesn't very well command capitalization but neither does my name so what the fuck? Here we are. I swore I wouldn't swear for this review but even feel-good harmonies connote good cursing like "hot damn this is a good fucking band man."

So Al's Place is not a hardcore bluegrass band. More of a coastal, easy, harmonic approach which leads me to a big but: all these folks have hard-ass jobs. I tell you, Al's Place is a giant slice of Americana. The way I found them is by hearing some thumping bass every Friday evening while I was trying to put my daughter to sleep. After she was asleep I could go out to my carport for a cig and hear the songs being played. I heard tunes by Johnny Cash, Bill Monroe, Hank Williams, etc.

Now I keep my daughter up late to go watch these folks play some sweet-ass tunes. I mean songs that they ain't inventin'; just playin' the songs the way they was invented. Sure they got CL Reavis playing fiddle and he's only eightysomething—not likely to be on MTV spring break but if he was I'd watch and so would you. The guy made fiddles for Charlie Daniels for fuck sake. When asked for a story he said "I got a two dollar shirt and a two dollar fiddle." Both of which are hard to come by but I guess if you create one and hang around long enough you can get the other.

They don't often play bars. You're likely to catch them playing at community events raising spirits for a special cause whether that cause be high school sports, a senior citizen center, or a YMCA benefit. All they need is one mic. You wish you had a band like Al's Place in your hometown, let alone practicing two doors down.

I'd love to introduce the entire band but I think you'd do better meeting them at their web site, AlsPlaceBluegrass.com, or their MySpace page. The songs here are taken form a live CD they threw together but they are in the studio and looking forward to a new release right soon. Their guitarist, Peter Yager, has some killer solo tunes that he wont release for fear of copyright infringement but let me just say that the doctor's fingers have never been broken at the right time. Check their website regular-like for future updates and request often "Killing Time is Killing Me". —ES

The music of Al's Place Bluegrass Band remained on Unlikely 2.0 for one year, and was then removed for reasons of space and copyright.