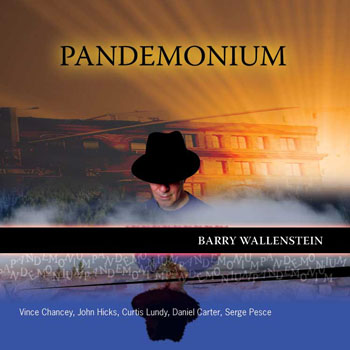 This month we are pleased to present two tracks from the unique blend of spoken word poetry and jazz that is Pandemonium, the brainchild of prolific American poet Barry Wallenstein released by Cadence Jazz Records. Featuring John Hicks on piano, Curtis Lundy on bass, Vincent Chancey on the French horn, Daniel Carter on the saxophone, and Serge Pesce on guitar all framing Barry Wallenstein's voice, each track is a complex mixture of musical voices and threads, often featuring more than one poem, as do the two tracks we present here. Check 'em out, and scroll down for Kirpal Gordon's review and critique of this amazing album from one of jazz's most fascinating poets.

Pandemonium, Cadence Jazz CD 1194, is available in stores or direct from www.CadenceBuilding.com. For further info, bookings and press, write to Barrywal23@aol.com.

Songs from Pandemonium remained on Unlikely 2.0 for one year, then were removed for reasons of space and copyright.

No question, the band is fun, nutty, capable, but the first thing a listener is confronted with in Pandemonium, Barry Wallenstein's latest CD from Cadence Records, is the voice of the poet. No stranger to wrapping his well-crafted lyrics around what a little moonlight and a jazz ensemble can do, Wallenstein is a most distinctive word slinger. Play one line of verse from any of the nineteen poems on the CD and you know it's he.

A uniquely individual style is the essence of jazz. Stan Getz earned the nickname The Sound for his cool, lyrical, laid-back, saudade-filled tenor sax approach, a perfect fit for the bossa nova. Miles Davis became the nickname The Sorcerer (given to him by Herbie Hancock) for his lean and clean, voo-doo haunted signature style. Frank Sinatra remains everlastingly The Voice for what he did with a song. A poet who has a lot in common with Getz, Miles and Sinatra, especially in his phrasing, economy of gesture and chops, Wallenstein deserves the nickname, The Speech Singer. 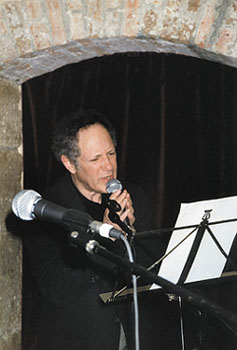 Laced in bourbon and gravel, mother wit and the blues, The Speech Singer hits you like a double shot on the rocks: it goes down smooth and mellow but then it flutters and swings, cries and flies in the mind's sky leaving its rainbow indelibly upon the listener long after the rain of grog song ends. The Speech Singer's a breath of fresh air in a literary era that will be remembered for long runs of blast, blather and honk.

Unlike many MFA-ers who recite as if the end of a line of verse were a lilting question mark, The Speech Singer never rises without reason nor strays from its breath-driven core. Unlike the percussive hip-hoppers and the more motor-mouthed dope rhyme sayers, The Speech Singer never shouts about louts or pouts about being down and out—it's too existential to complain, too cosmically gravitas to take itself seriously. Moreover, The Speech Singer echoes what the word on the page does: it insinuates rather than explicates; it's more tone poem palette that flavors a range of meanings than a hammer of one note opening a hole in your head. It doesn't push or call attention to itself. It merely creeps up along the spine just above sotto voce, slips into the earlobe, locates the reptilian brain that rules our fight-flight cruelty and slips it a Micky Finn so our humanity might have a chance to mediate the moment.

The Speech Singer knows the sorrow already hidden within the quotidian, and so it pulls no punches with platitudes. Instead, it takes the lower ground: "I'm begging you, old Reaper, / when you show up in your hood, / you thief in the form of a shadow, / leave the lectures home, let me empty the glass / and your stroke be swift and clean" (from "Drinking").

How to describe the effect of his spooky, ancestral yet pleasing delivery? One critic called it, "One part Mose Allison cool, one part Allen Ginsberg beat." Alicia Ostriker wrote, "Barry Wallenstein's voice is unique in American poetry: magic, seductive, cryptic, more than a little frightening." Nevertheless, as M.L. Rosenthal reminds us, "Wallenstein's poems bring a sturdy acceptance of fear into the open and look at it, without the usual chic mannerisms and the self-pity of so many poets." Vernon Frazer remarked in All About Jazz, "His voice exudes the hipster's savvy sensibility, its cockiness and angst, and a warmth as cozy as the night's embrace." Collette Inez said, "He gets the pitch right: no false notes in his symphony of voices."

What a symphony of voices he conjures! Put it this way: quoting Mezz Mezzrow and William Butler Yeats on the same CD has got my attention! The tenth track is a great first stop for a listen. It's where two narrative poems—"Insinuation" (inspired by a Mezz-ism, Never remind a gangster of his pulse, unless you want to lose yours fast) and "Crime"—loop around a blues.

The legendary pianist John Hicks, on one of his last record date before his demise, intros with a classy, bluesy flourish. The Speech Singer's first line—alliterative, Brechtian, swinging—lays down the tempo, and Curtis Lundy walks the bass; Vincent Chancey's ethereal French horn haunts in the background before teaming up for trades with Daniel Carter's spare trumpet. Guitarist Serge Pesce fills in with his box of gizmos, creating a sonic and sympathetic environment for the toughed-out truths The Speech Singer witnesses. It's as street-wise as anything out of Nelson Algren, Langston Hughes or Herbert Huncke.

Yes, but the ease with which Hicks and company build a case for The Speech Singer suggest there's a lot more to the art of joining poetry to music than handing out lead sheets or playing softly under the spoken word. It's the ears that the band brings to The Speech Singer that distinguishes this most satisfying collaboration. The second selection illustrates what I'm talking about. Like the earlier "Insinuation"/"Crime," both halves of track six—the Yeats' tribute, "At Thor Ballylee," and the title poem, "Pandemonium"—reach a thematic unity, dynamically rendered by the rhythm section and the soloists.

Once again, Hicks opens, playing sweet, gorgeous and bright, realms of infinite possibility. When The Speech Singer comes in, Hicks and Lundy lock and the first three spoken word choruses roll out in tight AABB rhymes. Right there you know the poet and the band have an impeccable sense of time. There's no drummer on the CD and no need. Then Hicks takes a mighty solo, fingersplashing that keyboard and it's almost heaven-sent before The Speech Singer comes back smooth and knowing for the final stanza whose last line's extra measure cues the band for the transition into the next poem. The horns stretch out abstractly, but then Lundy plays a serious bass solo that becomes quite the tasty duet when The Speech Singer returns. "While the generals speed to their offices to calculate the scores of blame," pandemonium connects all the dots. Near the end, the band, like "the many tongues of flames," rip into some wild arresting noodle-dom, building toward a crescendo. What better musical device to voice this mood of pandemonium, of "that rumble before the joists gave and the bleeding call of the world" than free jazz?

To my ear, nothing balances free jazz's assault on form and melody like the blues, and that's the medicine the band plays in understated, elegant style on half of the remaining cuts. Like The Speech Singer combining two poems on one track that speak back and forth to one another, the band's ability to "speak" in alternating approaches helps sustain the element of pandemonium throughout the CD.

However, the whole story is that each track has some skillful, unusual music going on. Of particular note, on the second half of the opener, "Lorelei," check Lundy's soulful bow work on double bass; turn off the lights and play the ghostly, siren-filled, echo-chambered "Ballad" a few times in a row; float along the prophetic "The Job 2008" for Pesce manifests some eerie sounds from his guitar accommodee bag as this scary tale from the future grows odder; consider how united in mood and musical measure The Speech Singer and the band become in "Lifey/Deathy," from Carter's gorgeous trumpet to the ensemble playing that follows.

It's this rapport between poet and musician that's at the heart of everything bright and beautiful in this project.