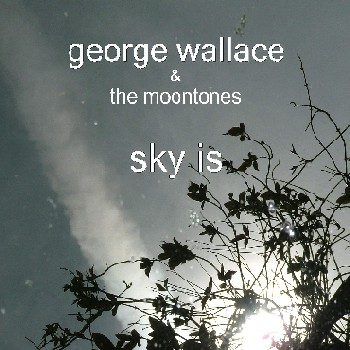 The poems of George Wallace unwind like a flawlessly coiled beatnik, sensuously wafting through themes of loneliness, denial, and all those other traumas we associate with the word "love." In his new spoken word album Sky Is, Wallace is backed by Tony Lamb's band "The Moontones," who bring an ethereal fluidity to Wallace's sharp sense of location. Sky Is tackles the deep isolation of our era, our economy, and the way we pursue relationships and seeks the rhythm and cadence in the layers of our frustration and ennui. What it finds is a remarkable capacity for happiness and strength, which rings through very clearly in Wallace’s calm, pleasured voice and the powerful backings of The Moontones. We're proud to present three tracks from Sky Is here at Unlikely. —JP

Based in New York and a regular on the performance scene, George Wallace—author of fourteen chapbooks of poetry—tours nationally and internationally to read his work at cafes, universities and festivals. A trained musician as well as a master poet, he has performed from the Bowery Poetry Club to Carnegie Hall, from the Beat Museum to Woodstock, from Boston to Fort Lauderdale, and from the Dylan Thomas Centre to Shakespeare & Co, Paris. He appears frequently in the United Kingdom from Cornwall to Cumbria and London to Liverpool, and has read in Italy, Ireland, Denmark and Greece. And he's appeared at many festivals across the country, from the Woody Guthrie Festival, Lowell Celebrates Kerouac, Howlfest and Rexroth Festival to the Insomniacathon in Lexington, Kentucky.

Praised for the 'Whitmanian breadth' of his voice, and his distinctive merger of bop prosody and surreal commentary, recent years have seen Wallace on stage in collaboration with musicians or opening for them—a list that includes DJ Spooky, John Sinclair, Paul Winston and Levon Helm. And he is in the frequent company of such Beat, Post-Beat and Alternative figures as David Amram, John Cassady, Steve Dalachinsky, Ira Cohen, Donovan Leitch, Peter Max, Charles Plymell, Janine Pommy Vega, AD Winans and others.

For more information on George Wallace, visit his MySpace page or PoetryBay.com, or check him out on CDBaby, where you can buy individual tracks.

Tracks from Sky Is remained on Unlikely 2.0 for one year, then were removed for reasons of space and copyright.