Memory Tables was a site-specific installation mounted at the invitation of Struts Gallery, an artist-run centre in Sackville, New Brunswick in the summer of 1996. A small university town, Sackville lies at the edge of the Tantramar Marsh, an extensive wetland area that has for the most part been dyked and used for agriculture and which eventually drains into the Bay of Fundy. It's a picturesque, windswept area known for the quality of the salt marsh hay grown there, and for a waterfowl park in the heart of the town.

But the Marsh along which Sackville sits has a less picturesque, far bloodier, history. Two hundred years ago, two European powers intent on colonial expansion and hungry for the resources this continent offered clashed there, and as a consequence it has a history of heartbreak, great tragedy, and violence. In the mid-eighteenth century this place was home to French settlers who set about trying to agriculturally tame the wetlands. But following the British defeat of French forces at fortress Louisbourg in northern Nova Scotia, French settlers in the region - the Acadians - were forcibly removed from the area and sent into exile, their homes and farms put to the British torch. In semantic shorthand we call it The Expulsion, and though this region was eventually successfully settled by English immigrants, it is the Acadian experience that still frames regional, provincial and national history.

Memory Tables obliquely responds to this history. Three convention picnic tables made of cheap spruce were altered so that the tables sloped down toward one corner. It made sitting at them precarious and, more importantly, an activity of extreme self-awareness.

The table tops were used as sites for text which was burned into the wood, the parallel lines of 2 x 4 lumber functioning as a sort of lined writing tablet so familiar to children learning to write. The sloping of the tables was also meant to evoke the didactic signs - text and imagery on panels angled so as to make for easy reading - common to museums and historic sites. 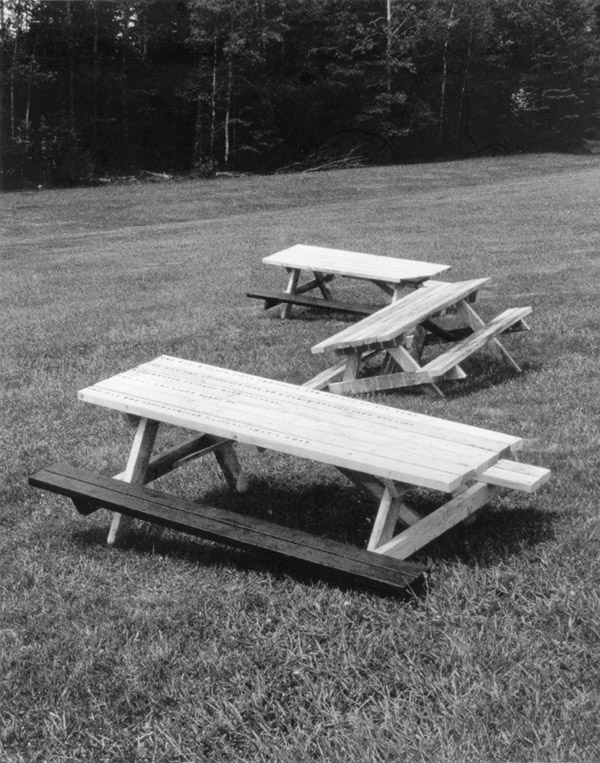 IT IS, FIRST OF ALL, A PLACE WHICH TOUCHES, FOR EXAMPLE, THE OUTSIDE

OF THE FACE. IT IS A WORLD OF THINGS, OF BIRDS, OF SCATTERINGS FROM

ABROAD. IT IS ALL BRIGHTNESS AND SPIRITS

AND WIND, THE CURVING PATH OF.

TO DREAM OF THIS PLACE MIGHT LEAD TO POLITICS, TO SPEAKING WITH

A PECULIAR ABANDON. THE WORDS, LIKE THE NIGHT ITSELF, AND AFTER

THE MANNER OF ALL NIGHTS, KEEP NEGLECTED LOVE WITHIN THEIR CHARGE.

TO THESE WORDS, AND TO THIS PLACE, COME KINDS OF MAGIC. AND A WIND

ONE TRIES TO FIT.

THE WAY THIS PLACE FILLS THE SPACE AND SOURCE OF ALL NAME.

THE WAY THE RECOLLECTIONS OF SUCH A PLACE SETTLE INTO DETAILS

THE WAY THE LIGHT MINDS US.

THE WAY THE GEOGRAPHICAL HAPPENS, THAT'S WHAT.

Gil McElroy has curated exhibitions for galleries and museums in Canada, and written for magazines in Canada, the United States and Australia. A selection of his essays, articles and reviews was published as Gravity & Grace: Selected Writing on Contemporary Canadian Art (Gaspereau Press, 2001), and in the anthology CRAFT Perception and Practice: A Canadian Discourse (Ronsdale Press, 2002).

He currently lives in Colborne, Ontario.