The cover notes for Leigh Herrick's twenty-track album of music, spoken word, and sung poetry, Just War, include the statement:

The attacks that occurred in the United States on 9/11/2001 did so just 19 days before my departure to Vermont. This had a grave affect on the course of my work, not altering it, but deepening it, catapulting me into what I believe is a most necessary look at what it means to be living as a citizen of conscience on Earth and in this beautiful country, America. 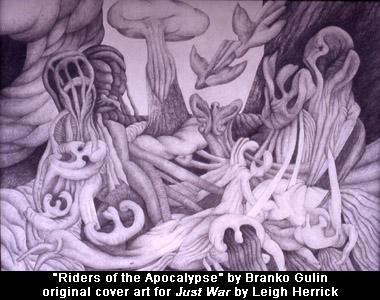 The artist's statement illustrates how Just War is not simple reactionary philosophy; neither anti-Muslim jingoism nor self-hating anti-Americanism, but a complex reaction to strange times. In pursuit of the necessary complexity, Herrick played the conga, large and medium tars, kanjira, tambourine, riq, guitar, cowbell, shekere, uyot hand rattle, tuning fork, telephone and a coconut shaker with coco beads, layering them with several vocal styles. The whole thing is done in a stripped-down production that makes you feel as if you're in a room surrounded by active, energetic musicians and singers.

We're very proud to present her tracks "In Consequential Ballad," a huge and beautiful overview of changing U.S. politics, along with the instrumental "Don't Fence Me In." But if you restrict yourself to these tracks, you might come away with the mistaken impression that Herrick's statements are restricted to Americana. There's a true global view in Just War, based on absolute faith in what happens in one part of the world effects the whole world. The interconnectedness of our species is explored largely through music, but also through her lyric poetry, with tracks such as "Congo Congo" and the "Passover 2002" medley. So after you're finished here, be sure to check out her tracks at CDBaby or iTunes. —JP

In addition to the 2004 release of her CD Just War, Leigh Herrick's most recent poetry manuscripts are Constitution and Laying Cut Grass (both circulating). Herrick's poetry or essays have most recently appeared in print or are forthcoming in Howling Dog Press, Kalliope, and MARGIE, as well as online at Howling Dog Press and others. Herrick is the recipient of several awards and fellowships for poetry including a State Arts Board Grant (Minnesota). Her latest public reading was part of the Minneapolis Housing Fund's Home Sweet Home Again Traveling Exhibition and took place in Minneapolis Public Schools before the Mayor, Board Members, and others involved in or concerned about the conditions of homelessness in the city of Minneapolis and what this means for students and educators alike.

Songs from Just War remained on Unlikely 2.0 for one year, then were removed for reasons of space and copyright.