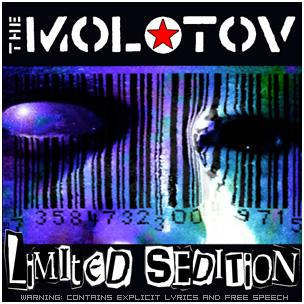 The recently released CD (demo), Limited Sedition by The Molotov, is an angry, charged, and at times darkly humourous collection of seven songs. The music is a hybrid fusion of industrial, rap, hardcore punk/metal guitar riffs, breakbeat and pumping techno, while the lyrics are explicit, confrontational and pull no punches.

Similar to Rage Against The Machine, Anti-Flag and Public Enemy in their unashamedly anti-corporate and pro People Power stance, The Molotov deliver music and words straight from the heart. The writer, lyricist and guitarist, scart (shane carter) blends riffs, beats and styles, new and old, in his songwriting to create a unique, catchy and powerful sound that well suits the hard-edged lyrics. You can learn more about them at their web site at http://www.triplejunearthed.com/TheMolotov, or their MySpace account at http://www.myspace.com/themolotov1.

Aristotle said that it was easy to be angry, but to be angry at the right person, for the right reasons, is not easy. One of my favorite of his concepts, although I grant it's better with electric guitars. The Molotov's delightful song "Hey-Ho (Howard the Coward)" has a hook slamming Australian Prime Minister John Howard, but the verses examine the true complexity of the situation that causes their rage: the slide of capitalism into corporate fascism, a slide that Howard, Bush, and Blair only facilitate as pawns. These are not simple, knee jerk lyrics; these are analyses of Western civilization in decline. And that hook does rock. —JP

What I particularly liked about Scart's Molotov CD is its Renaissance energy. I mean I know this guy as a visual artist who does incredible eye-catching "underground" art from the Land Down Under. Have you seen his Synaptic Graffiti Collective, a poetry, art, music, spoken word, performance, image animation and text motion presented in a multimedia and live performance format? He & his partner in crime Sara are the founders and guiding lights behind that. So I wasn't expecting to find he's writing the songs, playing all the instruments with skill & doing some smart sound engineering. Check out how he's able to add flavors & nuances, electronic & otherwise, to his singing. I love the chutzpah of the guy, just repairing to the home studio with tunes & cool gizmos & his mad rhyme style in the lyrics. Really, he certainly has his heart in the right place & he's certainly in a 300 year old "romantic tradition" in the English language. Yes, I guess the songs are "political," but what remained in my ear days after first hearing it is more the level of so many talents swirling together. He's angry, but he's funny, urgent, nutty. So what if he ain't Noam Chomsky, you know? He's dead-on in terms of his intuition & getting to the feeling of what's up globally. A wild cry for peace, really. —KG

Oh, it's no philosophy textbook. No reason it should be. I was watching old Dead Kennedys clips the other day, there's some in the documentary Anarchism in America, back in the 80s when they were jumping around and getting stagejumped and screaming about "California uber alles." And you know, the majority of people in that audience weren't going to go out and study anarchistic and fair trade theory. We don't expect that from the anthems. Joe Hill wasn't an educator. He was a rally point. And I find these great rally songs. I also didn't realize that Scart was doing all his own instruments; that's really cool. —JP

You nailed it there: these are not theories but anthems, anthems not just of outrage but of the joy that lives & prevails under the catastrophic times we live in. Is it punk, new wave, rock, pop, hip hop or all of the above? —KG