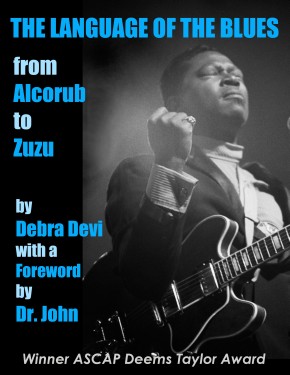 Occasionally one picks up a book that vibrates in one's hands. One reads its contents and the vibration increases. The Language of the Blues: From Alcorub to Zuzu by Debra Devi is literally ALIVE with the personalities, histories and music it describes.

The format of the book is a 'dictionary of terms' but its parameters go far beyond mere 'meaning'. Phrases such as 'cooling board', salty dog', 'coffee grind', 'black dog', words like 'mojo' and 'jazz', some of which by now are common slang, 'cool', 'jive', 'uptight', 'gig', 'cat', entire traditions, Voodoo, Boogie Woogie and the Blues themselves, geographic points like Memphis are handled so skillfully that the book serves as an initiation to a tradition and opens the portals of its secrecy to even the most uninitiated. For blues players, for poets, for etymologists, for scholars of the African people and Diaspora, for all who seek to understand language and its permutations, Devi's intricate research represents a major achievement and will serve as source material in ways this writer can only intuit.

Devi has written a deeply moving preface to her work: "As the Africans became Americans, they applied their aesthetic values to their circumstances and created the Blues, a music so emotive, and rich with possibility that it birthed jazz and rock-n-roll within decades of its own conception...The Wolof people were the first contributors of African words to American English. Their wealthy empire was in western Senegal along the Gambia River"... (and I paraphrase) subjected to multiple invasions, eventually sold as slaves, the Wolof landed in South Carolina in the middle to late 18th Century. The next influx, from the Bantu speaking tribes in the Congo, central Africa, arrived a few decades later. Less citified than their predecessors, sent to and isolated in the cotton fields, they were able to retain their culture to a larger extent, bringing with them an instrument called mbanza, morphing (etymologically) into banjo in the Deep South. Forbidden to speak their native languages, the enslaved population retained its cultural identity by developing 'Signifiers', terms understood only by those who already knew their meaning. Many of these same 'signifiers' as Devi shows are in common, highly charged usage in the songs, street talk, literature and conversational speech of the 21st century.

Devi explores these linguistic roots or retentions in great detail, without losing her personal approach. She writes with profound clarity--running the gamut from high to low, so to speak, of English usage with absolute fluidity. She reminds us that the musical urge to unite with the source of sound is a central feature of every culture that acknowledges anything beyond itself. "In Yonuba culture, the ability to connect with one's inner divinity is described as itutu or 'coolness' (from this we get the American ideal of the cool or soulful musician)". Skillfully weaving her understanding of Yoga and the pranic fields of the yogin (Devi edited Sharon Gannon and David Life's Jivamukti Yoga) into this book without ever seeming pedantic or invasive (indeed Indian music is often compared to the Blues--Rene Daumal insisting on African origins of both Dravidian and later North Indian rhythmic structures), she handles the salacious aspects of the lyrics with such ease that one would swear Devi had grown up in the Ninth Ward or in the "buffet flats" and not Milwaukee by way of Malibu.

She has evoked her subject matter, the personalities, the terms, the roots of these terms and the techniques of the music itself with a passion and perspicuity that goes far beyond observation. Former associate editor of Blues Revue, journalist for Rolling Stone Online, Yoga Journal and The Village Voice, she is equipped to cover the terrain, but the work she has created is beyond her own experience. It is both a record of crossover culture and a profound analysis of the linguistic permutations which characterized that process. Devi is also a player, therefore her explication du texte are not limited to linguistics but cross over, even at this level, to musical analysis, of the instruments, of the music and of the rendition of the music, which only a player can convey.

For those of you who spend time at the laundromat, who travel on the bus from the hardware store to the Port Authority and back, who sit at Bread Alone in the early hours of the morning, for those who worked in the civil rights movement, for blacks whittened by the promise of suburbia, for those who groove on this music, this book is a must. Connoisseurs of the Harry Smith collection can use this book to understand the Cajun texts. Even a casual reader will walk away enriched, in ways that are difficult to describe but will be understood by anyone who actually takes the time to read The Language of the Blues. Dr. John, who wrote the foreword, said to the author "Whatever you get outta this crap, go with it. You got the same kinda jive-ass brain I got, chile. I like that. Do good now."

Devi generously guides the reader to the songs in which the terms she clarifies are found, quoting the lyrics "When my baby go to bed, it shines like a morning star. When I crawl in the middle, it rides me like a Cadillac car." Ed Sanders urges "lovers of music and just plain old lovers" to read the book. Its power of evocation was so profound that I heard again the late Joel Bishop O'Brien, whispering in my ear more than 4 decades ago as we listened to Blind Willie Johnson one night when my parents were out (and he was free to play this 'forbidden' music to me).

The Language of the Blues, from Alcorub to Zuzu, with its details derived from the author's perception as a guitarist, from the interviews she did with more than twenty musicians: Robert Jr. Lockwood, Bonnie Raitt et.al., from her broad-spectrum study of existing works on African History and languages, the early South and musicology itself and from photos of Bessie Smith, Robert Johnson, Skip James, Memphis Minnie, Muddy Waters et.al. evoking the eclectic elegance and pathos of the music and its players, goes beyond its components and into an initiatory quality which drew me to it from the moment I received it, on my birthday, as it were.

In the light of the Katrina tragedy and the two-faced policy it clearly revealed and the fact that the country is at war, with an overwhelming majority of the official soldiers (no record of the mercenaries and their statistics) being black men who have died or been wounded in the (illegal and illegitimate) invasion and occupation of Iraq, this book, with its evocation of the sacred and profane roots, if they can be differentiated, of Afro-American culture is a gift in our midst, a deeply moving gift, birthday or not.

Louise Landes Levi is a poet, translator and musician. Her works include translations of Rene Daumal's RASA Essays on Indian Aesthetics, Sweet on My Lips: the Love Poems of Mirabai; and her own poetry books: Guru Punk, Avenue A and Ninth Street, and Don't Fuck with The Airlines. Photograph by Ira Cohen.