We've Got Your Back

“Here you go, Esmerelda.” Ernesto slipped an extra tamarindo into the child’s bag.

With her pigtails tied and blue ribbons, the girl reminded him of his daughters. Mia was now a corporate lawyer and Amanda worked in software. Both urged him to retire but he’d only get bored. Ernesto would rather run his bodega just like he’d done for the past twenty-three years.

A customer with a shaved head approached the counter and mumbled something Ernesto couldn’t hear over the fans blowing in air from outside.

“What was that?” Ernesto asked.

“Pack of Marlboros,” the customer said. A blue tattoo of a swallow on his dirty neck peaked out from under a gray T-shirt.

Ernesto opened the register and stepped back to let the robber rifle the cash drawer.

“It’s all I have,” Ernesto pleaded.

“Take me to the safe!” Holding the blade to Ernesto’s throat, the robber forced him toward the back of the store.

A man wearing a tweed jacket over a turtleneck stepped out from behind the pork rinds and hurled a jar of salsa with an arm like a major-league pitcher’s. The salsa beaned the robber in the forehead and he went down like an armoire tossed off a twelve-story building.

“That’s right. I’m Russell Joad from the Campaign to Ban Gun Violence. You’ll never need a firearm because the gun-control community will always have your back.”

Stacy turned onto Alameda. The night had been a waste of time. Jerry, if that was his real name, had talked about fantasy football through the entire dinner. When he found out she was a trans woman, he snuck out back leaving her to pay the check. Stacy turned into the bank’s parking lot. She needed cash to pay the babysitter. Stacy didn’t lock her car. She’d only be a minute.

The bank machine beckoned from under the purple glow of mercury-vapor lamps. After collecting a hundred dollars, she returned to her car and adjusted the rearview mirror. Someone reached around from the backseat and wrapped a forearm around her throat.

“Drive away and no funny stuff,” a male voice said.

“Please. I’ll give you all my money.

“I said drive.” The assailant tightened his choke cutting off Stacy’s breath for emphasis.

Stacy caught a blur out of the corner of her eye. A familiar woman dressed in black ran toward her car. When she was a few feet away, she leapt with a flying kick. Her Birkenstocks penetrated the rear window and collided with the assailant’s jaw, spinning his head like a demonic merry-go-round in a Stephen King novel.

“I know you. You’re Senator Joan Booker,” Stacy said as her benefactor zip-tied the attacker face down on the pavement. “You introduced a bill to register all firearms, the first step toward confiscation.”

“That’s right. Leaving you undefended is why it’s my duty to protect you, no matter where, no matter when.” Senator Booker brushed broken glass off her clothes.

The sound of glass breaking woke Amy from a fitful dream. Street lights from outside penetrated the gaps between the blinds and the digital clock said it was 2:17 AM. Amy stilled her breath to listen. A bump came from the stairwell. It didn’t sound like her cat, Molly. Amy locked the bedroom door and dialed 9-1-1.

“This is Amy Witherspoon,” she whispered, “58 Atkinson Drive. I have an intruder.”

“Stay on the line. Police are on their way.”

Amy went to the closet and retrieved a muzzle-loading rifle, the kind of weapon the Second Amendment’s framers had intended. She knew police response time was twenty minutes so she poured black powder into the muzzle spilling half on the carpet, topped it off with wadding, and tamped it with the ramrod. Before she could deal with the flint and projectile, a man in a ski mask broke through the door and forced her toward the bed. His breath smelled like rotting meat. She tried to use a wrist lock she’d learned in aikido but couldn’t get her feet under her. A stranger stepped out of the shadows and brained the intruder with an Olivetti typewriter that had a sticky S key. Amy’s assailant collapsed faster than Pets dot com.

“That’s right, Amy. You’ll never need that silly musket because the New York Times opinion page will always have your back.”

“This is Russell Joad from the Campaign to Ban Gun Violence reminding you that you’ll never need a firearm because I’ll always have your back. I'll be all around in the dark alleys. I'll be everywhere. Wherever you can look—wherever a street gang shakes down a small business, I'll be there. Wherever there's a thug beating a guy, I'll be there. I'll be by the bank machines, taverns, and parking garages. I'll be in the way a woman crosses the street because a man on the sidewalk makes her nervous. I’ll be there at the subway station and on late-night bus rides after twelve hours of minimum wage. Whenever a drunk businessman stumbles home with his wallet hanging out, I'll be there, too.”

They were thirty minutes late and Roxanne Goldberg was starving. She considered a glass of white wine but needed her wits about her. Roxanne bit into a roll and saw her literary agent escort a man in a white suit and Panama hat into the restaurant. He was famed editor Carson McDaniel. Roxanne swallowed hard and waved.

“Ms. Goldberg, I must say I found your book proposal riveting,” McDaniel said after he and Roxanne’s agent sat down.

“I’m prepared to offer you a five-figure advance. Now, let’s order champagne to celebrate.” McDaniel leaned in. “I like mine bone dry.”

“Are you going to get that?” McDaniel asked.

“It’s nothing.” Roxanne reached into her purse and shut it off. “Now, how about that champagne?” 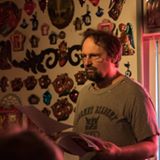 Jon Wesick is a regional editor of the San Diego Poetry Annual. He’s published hundreds of poems and stories in journals such as the Atlanta Review, Berkeley Fiction Review, Metal Scratches, Pearl, Slipstream, Space and Time, Tales of the Talisman, and Zahir. Jon is the author of the poetry collections Words of Power, Dances of Freedom and A Foreigner Wherever I Go as well as several novels and short story collections. His most recent novel is The Enigma Brokers. JonWesick.com. Jon recommends Planned Parenthood and the ACLU.