I didn’t see Larry again for eight months. My senior year took on a comfortable monotony. I studied, I wrote, I waited for letters from universities. I worked out the kinks in my financial aid paperwork. I went on a few dates with guys, and one with a girl. After a few months, Dad found another job teaching music.

The week before I was to graduate, Larry showed up outside the school again, sitting on the same spot on the wall. Distracted, I didn’t notice him until I was only a few feet away. I had a split second to make a decision: walk past as if I didn’t know him, or stop and say hello. His eyes were hidden by black sunglasses, but I knew he was watching the hubcaps of the perpetual stream of cars going by.

“Hey, Larry,” I said. His hair was longer, his beard out of control. I felt in my pockets for change. “I’m sorry, I don’t have anything for you today, but I wanted to say hi.” I didn’t sit down.

“Oh, hey. How are you?” He was distant, unfocused, a ghost almost invisible in the bright sunlight.

“I’m good,” I said. “I got into Berkeley.” I didn’t mention I’d chosen to go to UCLA instead. That way, I could still live at home and help Dad out, and we wouldn’t have to pay for housing.

“That’s where I went,” he said with a faint smile. He lifted his sunglasses to squint at me. “What’s your name?”

“Tyler.” I wondered where he’d been the past eight months. I wanted to ask if he had ever gotten his computer fixed, but I felt awkward standing near him chatting like this. Like a bird pecking at its own reflection in a window. He put his glasses on again and didn’t say anything else.

I looked at him for a second, trying to quell my anxiety. I’d stared at my ceiling night after night, insomnious, worrying about this and that, and every so often my thoughts would drift back to Larry, the street artist. I should have done more, given more. I should have taken that old laptop out to him, just in case it could have fixed something in his life.

My dad was miserable at his new job, but he kept saying how grateful he was to have it. He’d sold that laptop and some of his records to get us through his time of unemployment. He’d even stopped smoking weed, save for one memorable evening when I’d tried it for the first time. He’d brought home a special joint from the dispensary, and we’d sat on the futon and passed it back and forth as I coughed myself into a new world.

That laptop probably wouldn’t have done Larry any good anyway. 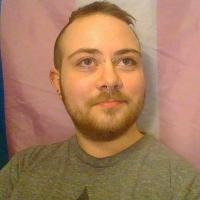