Bill Gets into the Park

Bill gets into the park wearing tennis shoes and carrying an umbrella because of the thunderclouds.  Rain isn't really imminent, but it feels safer.  In a big city like this, even in suburbia, you never know what's in the bushes.

The bark mulch paths are newly laid and soft.  His shoes squish and sink on them and water seeps quickly into his imprints.

Halfway there, he comes upon a scattered pile of white feathers.  He grasps one by the tuft end and gazes at the quill tip that stuck in the bird.  Pale brown skin is still attached.  At the supermarket the skinless meat is put on yellow plastic pillows.

Maybe a city predator tore the bird apart under the trees.  A cat.  A coon.  A coyote. The freeway roars like a giant river a couple of blocks away.

A vagrant, let out on the feeder, found his way to the bird coop and snatched the dove.  A sacrifice.  Witch cults in sleepy suburbs.  Not old mole-faced witches but suburban witches, smooth tongued and fuzz cheeked cuties selling herbal diet fads.

A bed of pansies.  He crouches down and moves his head into their yellow and black faces.  Hi, the pansies say, Hi.  He bends closer for the faint green odor.  He rubs the velvet petals between his fingers.  He crouches until the blood pounds in his neck.

He leaves the path, ducking aimlessly behind the trees.  Childhood games.  Hide and Seek.  He must seek someone.  Hide and seek.  He hides.  He sneaks along the duck shit covered path encircling a pond.  The quacking rushes.  Don't go near, you'll slip and drown.  The slippery shitty pond bank.  He breaks a hollow reed and puts it in his mouth.

The ground is wet.  Water seeps into his shoes.  Peek a boo, I see you.  He sees a woman in jeans, also ducking behind the trees.  Bill quickly scoots back to the path and saunters, noting labels with intensity:  Quercus nigra, Quercus Virginiana, Quercus palustris.

Bill's eyes dart in the woman's direction.  Her appearance is casual.  Too casual.  Hanging hair, dirty surplus windbreaker, a bit hunched, tight jeans, bony.  Come off the highway.  What else would she be doing in that neighborhood?

Though Bill does not hunt, the phrase "open season" occurs to him.  A woman like that is "open season" to anyone.  His fast glance focuses on the crack of her jeans, the darker part between her legs, between the two faded buttocks.

He's almost at the coop.  He hears them coroo, coroo.  The figure has disappeared behind the trees, only an elbow is visible; he is drawn to the figure like a magnet.

Bill's mind flashes on his wife's pubic hair or absence of it.  He asked her to shave.  It vaguely excites him.  Why did she do it if she always complains that it itches?  His face flushes thinking of his wife's image mixed with images of the woman's crotch, the woman's elbow.  He feels sweaty.

In his windbreaker pocket, Bill fingers small balls of old Kleenex, rolling them like an Apache worry stone.  He discovers a mint buried in there, covered with bits of stuff.  He pops it in his mouth.  The flavor shoots into his nostrils reminding him of brushing his teeth, of cleaning rituals which he has been assured all of his life will make things whole and new.

He sits on a park bench across from the cage.  The doves are visible now in the small cage, partially protected from the cold by plastic.  They're hunched over and watchful.  Chesty, top-heavy doves.  There was a woman, a friend of his mother's, who held him as a child.  A woman who squashed him against her soft body when she visited.  He wants to lay his heavy head on this woman's thighs.  The woman's lap dissolves and Bill sees his moody mother in the present.

The woman's disappeared.  His glance quickly encircles each tree.  Nobody.  Bill sees himself behind a hedge entering the woman with the stringy hair, whose pants rumple around one foot but she still wears her shirt and jacket.  She's thrashing with passion, limbs tight around him.  Then he is sitting back leaning against a tree trunk, the woman bent over his lap.  He feels a terrible loneliness as he looks at the empty hedges.

There is the small goldfish fountain near the dove coop.  Water plants float softly and dark greenly at the surface.  Golden fish hover motionless except by the smoke breath of fins.

Bill’s mind fades back recalling a childhood duck pond.  He sits on the rim made of bricks and runs his hands in the water.  Tall junipers shade him.  Pond spirits are whispering, Come in, come down with us, we're happy here, come play.

He's close to the road now and a large delivery truck revs its engines in an exuberant roar.  A helicopter whirls.

Bill puts his hand in the cool water.  As he does, a sign that he's seen many times catches his eye.  The sign shows a bug-eyed goldfish with bubbles, "Don't play with our environment.  This is our home."   He trails his hand in the water.  The goldfish have scooted to the other side under some greenery.  He thwacks his hand on the water raising foam. 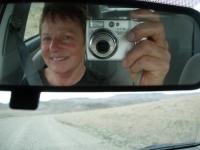 For the last two decades, Sabine Hilding has lived in the Pacific Northwest. She writes stories and loves collaborating with visual artists. Books are: Gorl with Beth Secor and David Hurley; Recurring Dreams with James Bettison; Vacation with Marylou Wilhelm.